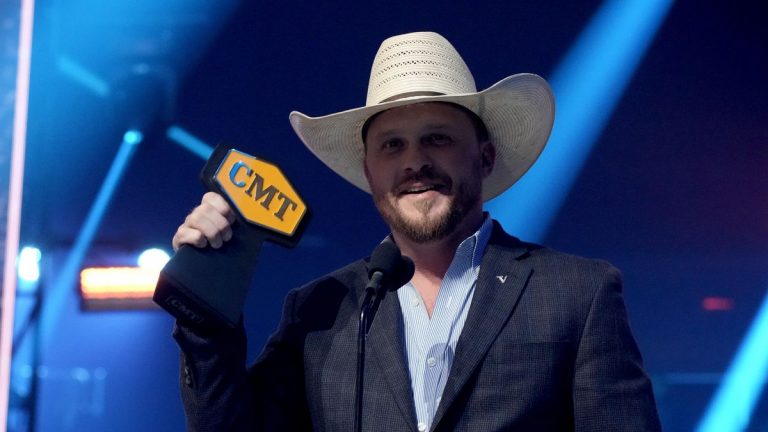 “Til You Can’t” penned by Ben Stennis, and Matt Rogers, lives on his critically acclaimed double-album, “Human.” The emotional-driven cinematic clip was directed by Dustin Haney and encouraged fans to spend time with loved ones.

“Dustin Haney made an awesome video. Matt Rogers and Ben Stennis wrote a great song. I am very proud to be the person who got to get the song,” he said. “Do you guys still believe in country music? I am very proud to stand up here with this award. This is the second CMT Award that we got tonight, and the best part of it is that it’s fan-voted. So, thank you to every single person who got up there and voted. Long live country music, are you with me?” she shouted while holding up the CMT trophy.

With the trophy in hand, Johnson told CMT backstage what the honor means to him and how he considers the accolade a big win in his book.

“I honestly didn’t expect this to be as big of a victory as it was until you really start. The fans that we’ve had never cared about radio, they never cared about record labels or even CMT. Then we made the right business move in order to get those fans,” Johnson said. “We have an opportunity right now to get all those fans together and to vote on one thing – they did tonight. I am so honored, I was very taken back.”

With Male Video of the Year under his belt, the “With You I Am” singer also received the trophy for CMT Digital-first Performance of the Year for “Dear Rodeo” on the CMT red carpet prior to his jaw-dropping performance.

Cody Johnson was one of many entertainers who graced the CMT Stage and performed “Til You Can’t” on Broadway in downtown Nashville. Fans who missed the electrifying act can catch Cody Johnson on CMT Music Awards Extended Cut on April 15 on CMT. The must-watch version will consist of 30 additional minutes and will have extra never-before-seen content.