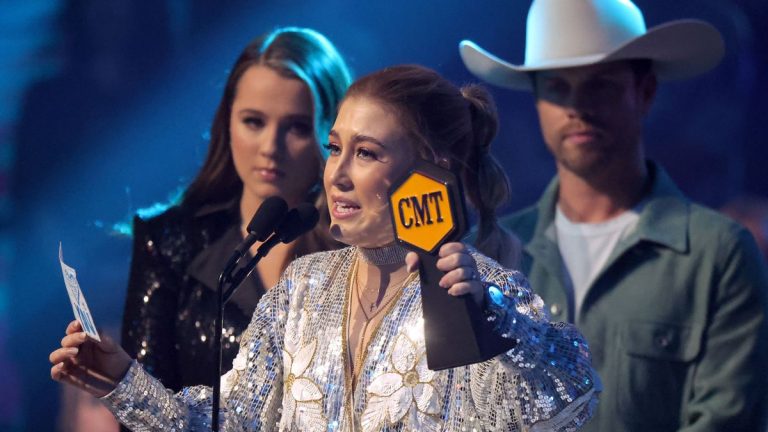 Never underestimate the power of women in country music!

Female hitmakers Maddie & Tae received the crown for Group/Duo Video of the Year for empowerment anthem, “Woman You Got,” at the 2022 CMT Music Awards on Monday, April 11.

The honor holds weight, as it is Maddie Font and Tae Kerr’s first-ever CMT Award. The trailblazers took to social media to gush about their nomination ahead of their win.

“It’s not everyday you make a music video dancing around the kitchen with your bestie and hubbies, eat fried chicken on an exercise bike and hang out with a ton of dogs…then get nominated for the #CMTawards!!” they wrote in the caption.

Dustin Lynch and Gabby Barrett announced Maddie & Tae as the winners of the highly competitive category. The news took Font back, as she was hit with a wave of emotions. With tears in her eyes, she made her way to the stage and whipped out a notecard that read, “God 💙 All of You.”

Kerr appeared on the big screen with her newborn child cradled in her arms. As soon as Font noticed that Kerr remotely joined her for the special moment, she broke into tears and instantly choked up.

“I have been drinking, I am so nervous,” Font said while laughing before she began to rattle off names that made their dream become a reality.

After receiving the accolade, Font sat down with CMT to describe her roller coaster-like emotions and to detail what the honor means to her her and Kerr.

“Based on the numbers, we should not have won this. I researched it. But it’s our fans and God. We’ve been losing this for about eight years. I’m going to go home and cry at Tae’s house. That’s what’s going to happen,” she said full of gratitude. “This is the biggest honor of my life, other than marrying Jonah Font. I don’t know why I’m surprised because I’ve been asking God for it for a long time,” she added.

The win does not come as a surprise, as the two paired their sassy single with comic relief in the music video. Throughout the clip, Maddie & Tae danced around the house and gave friendly nods to timeless movies like “Clueless” and “Risky Business.”