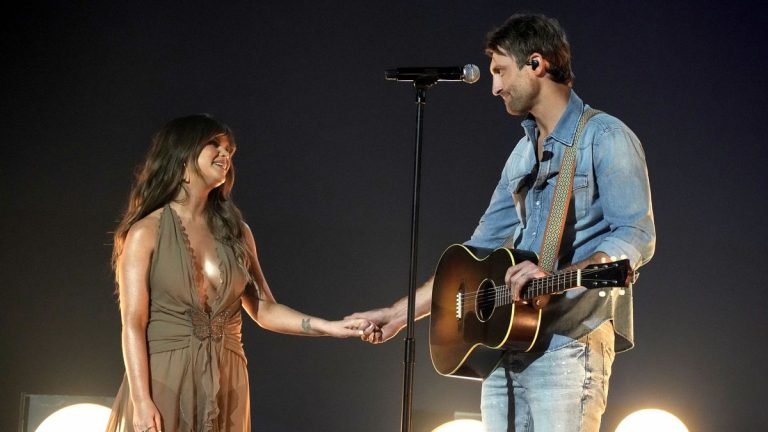 Multi-platinum artists Maren Morris and Ryan Hurd took to the 2022 CMT Music Awards Monday night (April 11) to share the recently released track, “I Can’t Love You Anymore.” While gazing into each other’s eyes with romantic string lights lining the stage, the two brought the vulnerable lyrics to life.

The female powerhouse serenaded her country artist husband, Ryan Hurd, with a tambourine in hand to keep the beat. As the “Chasing After You” artist strummed his acoustic guitar – a traditional country full-set band, which included the steel guitar, drums, and keyboard, played along to the love song.

Morris proves that she is a storyteller at heart, as she perfectly describes her endless love for her husband and pin-points all his redeeming qualities.

“You bring me coffee every morning | You’re fun even when you’re boring | And you like me even when I’ve been a b*tch | You watch me while I’m gettin’ ready| You lighten up my heavy| You’re so good lookin’ it kinda makes me sick,” she belted under the enchanting neon pink lights.

As the country couple conveys the diary-like melody, fans could almost feel their love radiating off the stage and through the television screen. Morris penned “I Can’t Love You Anymore” alongside Hurd and pop maestro Greg Kurstin.

“I Can’t Love You Anymore,” serves as the third track on Morris’ record-breaking album, “Humble Quest.”

The fairytale act at the 2022 CMT Music Awards follows career-altering news, as the LP recently broke the record for the most first-day and first-week streams on Amazon Music for a country alum by a female artist. Morris released the critically acclaimed collection on March 25 and penned the wine-night anthems and soul-touching ballads alongside Hurd, Julia Michaels, Natalie Hemby, Lauren Veltz, Jimmy Robbins, and Jon Green.

Mid-tempo anthem “Circles Around This Town,” which emphasizes the Nashville hustle as a singer-songwriter, scored Morris a nomination in the Female of the Year category. The hitmaker was up against other empowering females – Brandi Carlile, Gabby Barrett, Kacey Musgraves, Mickey Guyton, Miranda Lambert, and Tenille Arts.

The charming performance of “I Can’t Love You Anymore” will be included in the CMT Music Awards Extended Cut on April 15 on CMT. The must-watch version will consist of 30 additional minutes and will have extra never-before-seen content.