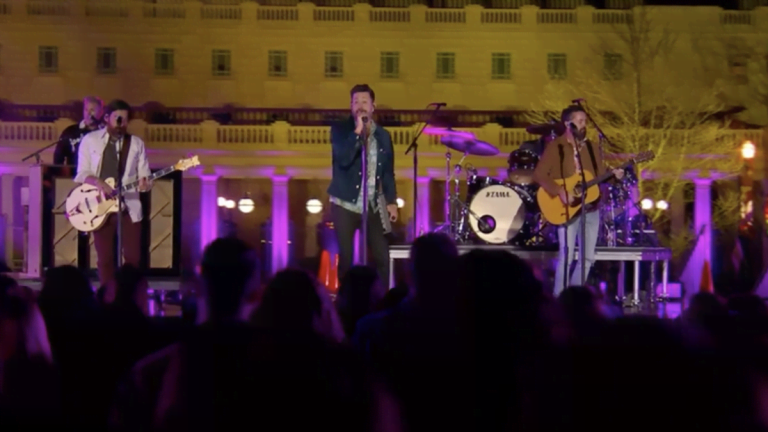 “What’s up, Nashville?” Ramsey shouted just moments before he kick-started the performance.

The group left fans with “No Hard Feelings,” as they instantly dominated the stage under the twinkling sky with their high-energy performance. From the very first note, fans began to dance and sing along to the uplifting track from their recently released record, “Time, Tequila & Therapy.”

The breezy tune serves as a reminder to always persevere, even when times get rough. At the beginning of the song, Ramsey explains how lonely life has been following a breakup. After a string of challenging days, he reevaluated his daily routine and realized that it took “Time, Tequila, and Therapy” to return to his usual self.

“I took a little time, tequila and therapy | And threw it in a blender with ice |I was more messed up than I cared to be | Spent a whole lot of lonely nights,” the band sang.

As they continue to deliver the toe-tapping track, it quickly becomes a positive anthem about self-growth. Despite battling a heartache, Ramsey began to rattle off ways to have an optimistic attitude going into each day.

“There’s no hard feelings | And no bad vibes | I can honestly say | I’m happy to see the happy back in your eyes| You found somebody| Who painted your grey skies blue | But do I wish it was me? Hell yeah| Am I all the way over the pain? Not yet | But the sun keeps coming up, baby | And I’m still breathing | And there’s no hard feelings,” Ramsey belted with his robust vocals. “I was mad at myself, pissed at the world | It was hard to get up, but I put one foot in front of the other | Kept on keeping’ on| Going through the motions,” he added while rocking the mini glockenspiel.

Absolutely no bad vibes after watching @OldDominion‘s performance of “No Hard Feelings” at the #CMTAwards pic.twitter.com/giM0vEkEod

The multi-platinum ensemble penned the single alongside critically acclaimed songsmith Shane McAnally. The 13-song collection, “Time, Tequila & Therapy” is filled to the brim with healing, happy-go-lucky, and inspiring tracks. In fact, their laid-back drinking song, “I Was On A Boat That Day,” scored them a nomination in the Group/Dup Video of the Year category.

“Anytime that we get recognized, it’s amazing,” frontman Ramsey told CMT. “That video, in particular, was really fun to make. It’s always really cool to get rewarded for doing what we love, which is having fun together on a boat. So, it’s awesome.” he said with gratitude.
The hitmakers went head-to-head with sibling duo Brothers Osborne, Dan + Shay, Maddie & Tae, Parmalee, and Zac Brown Band. The men of Old Dominion received a second nomination in the Breakthrough Video of the Year category alongside rising star Caitlyn Smith with “I Can’t.”

Ahead of the star-studded ceremony, the band described what it was like to work with the seasoned songwriter and singer.

“When we heard that song, we just loved it. She’s been a songwriter in town and a friend. Just working hard like everyone else, and it’s great to see her get her shot, and we’re happy to be a part of it,” said Brad Tursi.

The electrifying performance of “No Hard Feelings” will be included in the CMT Music Awards Extended Cut on April 15 on CMT. The must-watch version will consist of 30 additional minutes and will have extra never-before-seen content.