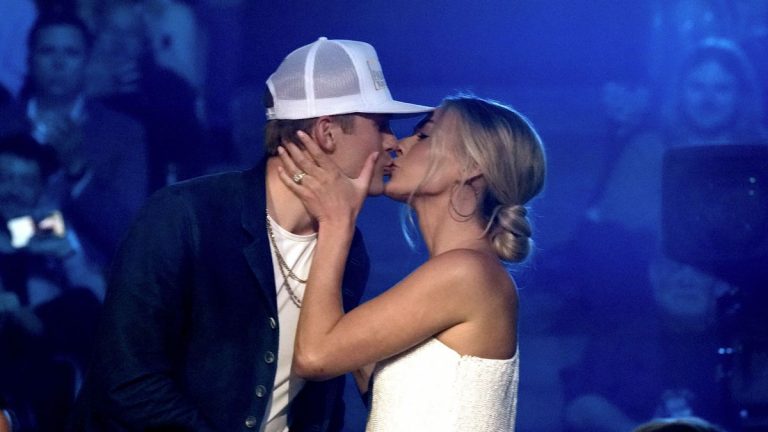 Pop the bubbly, because Parker McCollum received his first-ever CMT Award for Breakthrough Video of the Year Monday evening (April 11).

The Texas native walked away from the 2022 CMT Awards with a trophy in hand for his fan-favorite hit, “To Be Loved By You.”

Former Breakthrough Video of the Year winner Dylan Scott welcomed McCollum to the stage and granted him with the honor. In pure disbelief, McCollum made his way to the stage and stopped to shake hands with Old Dominion’s Matthew Ramsey and Thomas Rhett.

“I know my family is watching at home tonight on television. We have been watching award shows my whole life,” he said with the trophy in hand. “My mom is here tonight, my mother and father are all here tonight. I try to write real country songs from the heart that means something. I appreciate it being recognized, thank you,” he concluded.

Congrats to @ParkerMcCollum on winning Breakthrough Video of the Year We can’t wait to see what you do next! #CMTAwards pic.twitter.com/FVg6OfUCL6

McCollum sat down with CMT to debrief the memorable moment following his win.

“I’m incredibly humbled,” McCollum said of his win. “When it was Covid and I was home every day, and I had just signed my record deal, and my song was just on the radio and I was like, ‘That’s my shot right there.’ That song, because of those fans, went No. 1 gold and platinum before we ever went back out on the road again. I just wondered every day of Covid if it would be there when we got back, and it is exponentially.”

In mid-march, the romantic melody peaked at No.1 on Billboard’s Country Airplay chart. The budding vocalist penned the career-altering track alongside legend Rhett Akins, and Jon Randall had a hand in producing it. Viral hit lives on McCollum’s first major-label record, “Gold Chain Cowboy.”

Ahead of his massive win, McCollum dominated the Ram Trucks stage and gave country music fans a taste of his viral single, “To Be Loved By You.” For fans who missed his dance-worthy performance can, check out the CMT Music Awards Extended Cut on April 15 on CMT. The must-watch version will consist of 30 additional minutes and will have extra never-before-seen content.