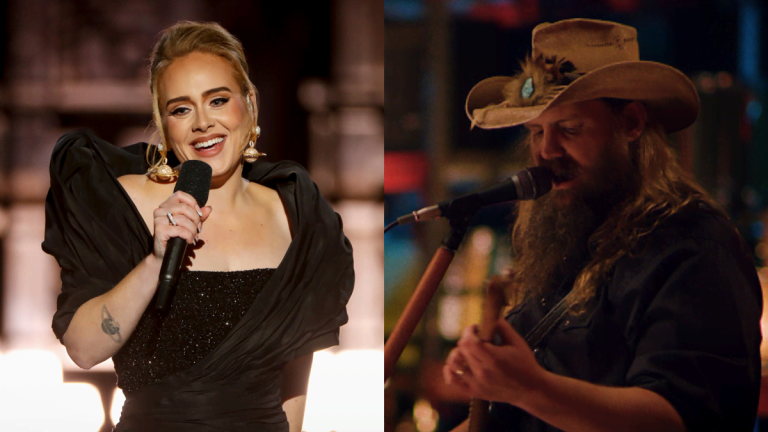 In very short order, Adele could have a No. 1 country single. Given that her partner on the duet take of her new album 30’s lead single “Easy On Me” — which has been serviced to country radio — is Chris Stapleton, it’s likely also going to be a long-awaited dream come true — she once pegged him as a “dream duet partner” — for the British superstar.

“Basically, I’ve’ been a fan of [Stapleton] since SteelDriver days,” Adele recently told Rolling Stone. “I’ve’ been covering SteelDrivers for like nearly 12 years now. It’s’ just…his voice is just f***ing brilliant.” To wit, a decade ago, she covered Stapleton and the SteelDrivers single “If It Hadn’t Been For Love” for bonus versions of her 2011 album 21. The song was originally on the SteelDrivers’ self-titled 2008 debut album, resulting in a Grammy nomination for Best Country Performance by a Duo or Group.

Regarding how their groundbreaking duet came together, Adele adds, “We still hadn’t met because it was during the pandemic. We had to start over Zoom. It was devastating. Yeah, it’s on there, and I think our voices work brilliantly together. [As a collaborator, he] would’ve been one person that I would’ve always have said yes, like 100%.”

For Stapleton, if “Easy On Me” hits No. 1 on country radio, it would be his second Billboard Country Airplay chart-topper, joining 2017 double-platinum seller “Broken Halos” in that achievement. Likewise, if it hits the top of Billboard’s Hot Country Songs chart, it would also be his second No. 1 for that chart, too. The other Stapleton single to reach the top of the Hot Country Songs chart is his 2015-released cover of “Tennessee Whiskey.”