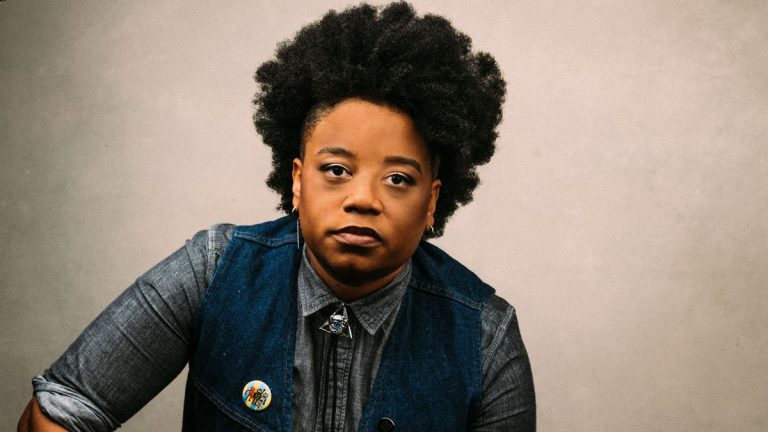 Amythyst Kiah wasn’t sure where she fits into country music. A Chattanooga, Tennessee native, Kiah grew up listening to the genre. She loved the melodies and the music, but she couldn’t find herself in its stories.

“I realized there’s more than one way to tell a story,” Kiah said. “So, I was able to gain an appreciation for other people’s stories, even if they weren’t related to mine. I also realized I could write my own story, and it’s just as valid as anyone else’s. It was really about the power of telling stories and having confidence that my story had value.”

Kiah is one of CMT’s 2022 Next Women of Country. She earned a Grammy nomination for Best Roots Song in 2020 for “Black Myself,” a challenging testament she wrote for her supergroup, Our Native Daughters. Founded by Rhiannon Giddens, the string band also included Allison Russell and Leyla McCalla, and the women share the strife and commonalities of their life experiences in their songs.

Kiah recently released her debut album “Wary + Strange” as a solo artist in 2021. Tony Berg produced the album that is an amalgamation of old-time country, roots, blues, and alt-rock that Rolling Stone called “one of Americana’s great up-and-coming secrets.” She calls it “melancholic.”

“I’ve just always been fascinated by stories about the underdog and dealing with grief and loss and sort the darker aspects of life,” Kiah said. “I’m a big fan of horror, psychological thrillers, high fantasy and just kinda weird, weird stories and very interesting, weird fiction. I’ve always been really interested in music that also reflects that sort of weariness and strangeness.”

It was the eerie, melancholic vibe that attracted Kiah to Appalachian music. She lists murder ballads as a “huge inspiration.” She learned to play hammer banjo and excelled at old-time rhythm guitar. She listened to traditional country artists the Carter Family and Jimmie Rodgers along with 1930s folk singer Vera Hall and blues and folk singer Elizabeth Cotten. She delved into early country blues, which she found reflects a similar weariness to the alternative rock she listened to growing up.

“I was like, ’Oh my gosh, like it has that same spirit,’” Kiah said. “A lot of the people that were playing this music, they were living in rural areas living in coal mining towns. That’s a hard life, farming or coal mining, which is what a lot of was happening in Appalachia. During that time, you had segregation. So a whole segment of the population was second-class citizens. There’s pain in that.”

She wanted to combine the old-time music world and the alternative rock world that she loved into one project. In doing such, “Wary + Strange” was born. She enlisted Berg to help with the “monumental task” of combining her musical influences into a cohesive project that speaks to people from various backgrounds.

Kiah wrote the songs over a five-year period, and it took three years to get the album out. Kiah knew more people would pay attention to “Wary + Strange” than any of her previous work.

“Am I truly reflecting my evolution as a singer and a songwriter and a guitar player?” she asked. “I was rediscovering myself and really taking stock of like my entire musical experience. It was therapy for me, but my music also ended up getting therapy because it kind of helped me see the picture of my entire story. This record is about me healing from trauma.”

She said the music is about dealing with social anxiety, the fear of rejection, the suicide of her mother, and how she responded to that.

“This ended up becoming part breakup album and part self-discovery and healing,” she said.