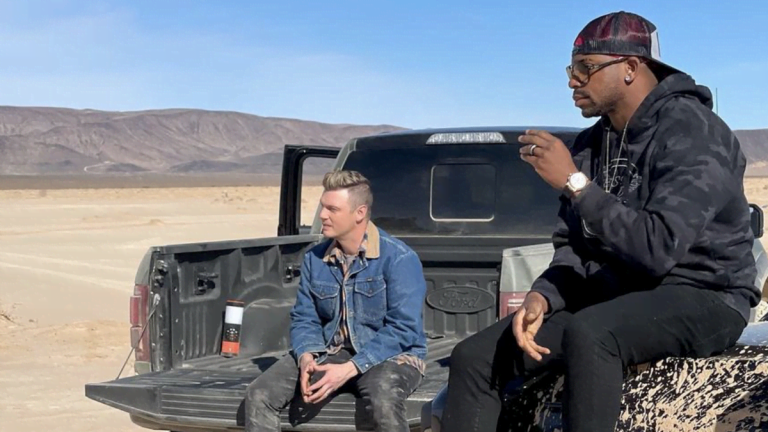 Long before Nick Carter became a pop-culture phenomenon in the ‘90s with the Backstreet Boys – he was a music hopeful with blonde lushes locks singing Alan Jackson’s old-school tune “Don’t Rock the Jukebox” around the sunshine state. While turning heads with his adolescent vocals, he quickly grew to appreciate legends such as Charlie Daniels and gravitated towards the creative freedom that country music artists have at their fingertips.

It wasn’t until 1993 when the critically acclaimed boy band comprised of Carter, Howie Dorough, Brian Littrell, AJ McLean, and Kevin Richardson was born. Together the ensemble developed a recognizable pop-centric sound, but they never pigeonholed themselves to one genre – leaving them to work their magic with Florida Georgia Line on platinum-selling hit, “God, Your Mama, and Me” in 2017.

Following the rapid success of the good-vibe anthem, the Backstreet Boys were welcomed into the country music space with open arms. While Nick Carter was writing music among notable songsmiths in Nashville, the name Jimmie Allen was constantly getting thrown around. Therefore, when Carter decided to return back to his country roots and pursue a solo project – he called up Allen and pitched him “Easy.”

“When I was writing music, everyone was just like, ‘you got to meet this guy, he’s incredible.’ I was working on a song called “Easy,” and I talked to my producer Vic Martin about it, and I said, ‘maybe Jimmie Allen would like to be a part of it,’” he exclusively told CMT. “He’s like, ‘that’s my boy like we’re best friends.’ So, he called him up, and sure enough, we got him over FaceTime,” he recalled.

The Grammy Award winner continued to mention that he instantly kicked it off with the “Good Times Roll” singer, and he took it upon himself to write the second verse. The inspiration behind the crossover country track came to him when he was flipping eggs in the kitchen for his children and wife, Lauren Kitt.

During the writing process, Carter couldn’t seem to brush off the simple task. In true singer-songwriter fashion, the hitmaker rolled with it and started pulling from real-life experiences.

“It really just started with the fact that I had been cooking eggs and making breakfast for my kids every single morning. The lyrics are literally about my life with my children and wife,” he said while also mentioning that he was inspired by country icons to push his boundaries and take the vulnerable storytelling approach. “I have been influenced by country music. I’ve been influenced by it since I was a little kid. If people want more of this, then hey, why not.”

You make it so easy to love you @Lauren_Kitt ❤️ Listen to #easy here ➡️ https://t.co/VY9WPyqtDt

I hope this song helps everyone express how #easy it is to love your person ❤️ @JimmieAllen #easytoloveyou pic.twitter.com/hOB8OPjrOC

Although Carter and Allen recorded the crossover country track separately, the way their unique voices are intertwined introduces the genre to a fresh sound that music-goers have been eagerly awaiting.

While the legendary musician has been on top of the music food chain, he admitted that he often struggles to get his solo career off the ground. When Carter stepped away from the group to work on solo projects, he knew it would be strictly for pleasure. Yet, after finishing the duet with the country breakout star – he began to have a gut feeling that “Easy” would resonate with fans differently.

“I’ve been part of the Backstreet Boys for almost 30 years. We’ve had much success. I won several awards, Grammy nominations…you name it, we’ve had it,” Carter put his long career into perspective. “But, as a solo artist. I haven’t really focused that much on it. I would put out music and kind of just have fun with it. I never had a No.1 record as a solo artist. It’s fine with me, and it doesn’t bother me. But, when I put this song out – it was just natural. This time around, this was a more of a personal song.”

After receiving positive praise for leaving his heart and soul on the writing-table, his creative wheels began to turn. He confessed that he’s not trying to break into a specific genre, but if a particular connection is created with a listener by incorporating country elements, he might “go down that road” in the future.

Thanks for having me be a part of this song brother ♠️ https://t.co/u8YuVsg29r

The icon continued to gush about Allen’s go-getter mindset and what it was like to work so closely with the hitmaker.

“He’s honestly one of the most down-to-earth and humble people I have ever met in my life. I have been listening to his music for quite some time and I am just loving it, as he’s one of those new progressive country stars,” he said. “He’s a motivated writer for sure.”

He mentioned that while filming the music video for “Easy” out in the Las Vegas deserts, he allowed Allen to bounce song ideas off of him.

“He said he had written 19 songs,” he told CMT in pure disbelief. “I was just listening to him and being kind of a sounding board. We have some ideas of maybe doing some more stuff together. I think he’s got a festival that he wants to set up in Delaware, and he invited me to do that. We kind of spoke the same language and saw the same things. He’s very creative, very talented, and he’s definitely on the rise even more from where he is at right now,” he added.

While the two work on logistics and their follow-up project to “Easy,” Carter will also be gearing up for his state-of-the-art world tour with the Backstreet Boys. Come May 13, “Everybody” will “Get Down” to chart-topping classics that made the ‘90s boyband a global sensation.

“I like to say that there are only a few artists out there that do the same thing that we do anymore,” Carter pointed out while ratting off names like Britney Spears, Madonna, Janet Jackson. “It was important that the show was not just one-sided and that it had three dimensions to it – the dancing, the singing, and the lights. I think from that era, we really care about that. Our job is really to entertain people, we’re blessed and grateful for that. We don’t ever take that for granted, we pride our shows to be one of the best in the world.”

As the boys dance their way around the world, they will be singing hits off of their 2019 DNA record and will be connecting again with the tweens and teens of the ‘90s that had their faces hanging in their bedroom since day one. Tickets are currently on sale, and “Easy” is available to stream on any music platform.