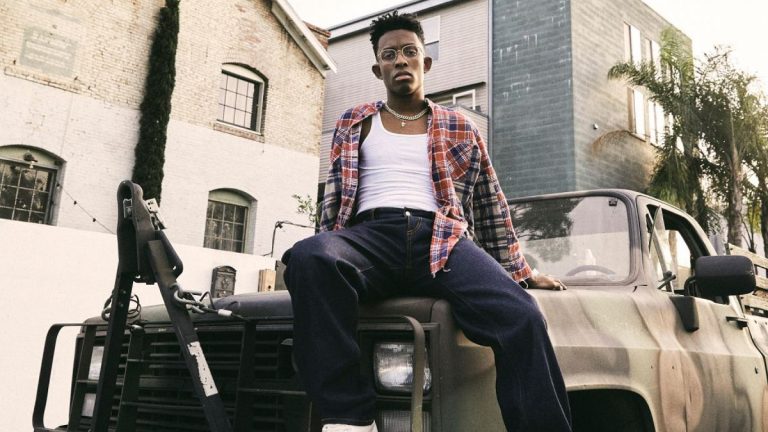 Breland continues to push the mainstream boundaries of country music with his ear-grabbing blend of R&B, rap, and country. Similar to how Breland placed his unique country twist on “Throw It Back,” featuring Keith Urban – the breakout star pulled from his diverse musical palette to create country-gospel anthem, “Praise The Lord.”

The genre-bending artist took to TikTok on Saturday (Feb. 12) to tease his upcoming single, “Praise The Lord.” While parked on the side of the highway, Breland filmed himself selfie-style singing along to the tribute track that credits the Lord for everything he has experienced, likes, and has gained throughout his life.

“Praise the Lord for southern women | Hemi engines| Crispy chicken| Praise the lord for East Atlanta| Country Grammar | And my nana| Praise the Lord that I got everything I want and need and more| I might get drunk on Saturday, but first thing Sunday morn, I praise the Lord,” Breland sings while giving his fans a sneak peek.

“This is my song Praise the Lord releasing for y’all soon❗,” the hitmaker wrote in the short video on TikTok. “Leave a comment and share it if you like it 🙏,” he added.

In less than 24 hours, the clip garnered over 160.1K likes and 964.5K views. Country music fans did not hesitate to worship the beat-driven melody and took to the comment section to encourage Breland to drop the hit sooner than later.

“This better come out real soon! This is a windows down radio blasting cruising down the backroads kinda song!! 🔥,” shared a fan. “When is this releasing?!” asked another out of curiosity. Breland quickly replied, “If this gets 1 million views it’s uppp.”

With the numbers continuing to rise, the musician shared another video promoting the forthcoming single in front of the famous Gateway Arch in St. Louis, Missouri. The second clip has not reached one million streams – leaving the release date still up in the air.

Giving fans a quick taste of what to expect on social media has always seemed to work out for the rising star, as that is how he scored his record deal and broke into the country music scene with “My Truck.”

When Breland uploaded a snippet of “My Truck” on social media, he told his loyal followers that he would release the entire track if he received 500 comments.

Following the positive praise, it wasn’t long until the singer-songwriter recorded the country-rap track in the legendary Blackbird Studios in Nashville. Since then, Breland has been making waves in the country genre with his unique sound and proving that there is room in the honky-tonk town for crossover artists like himself.

Until fans can stream the dance-worthy anthem “Praise The Lord,” they can see the artist live with Russell Dickerson on the All Yours All Night Tour. Tickets are still available for purchase.