Brett Young Details Recording with Darius Rucker, His Respect is “Through the Roof” 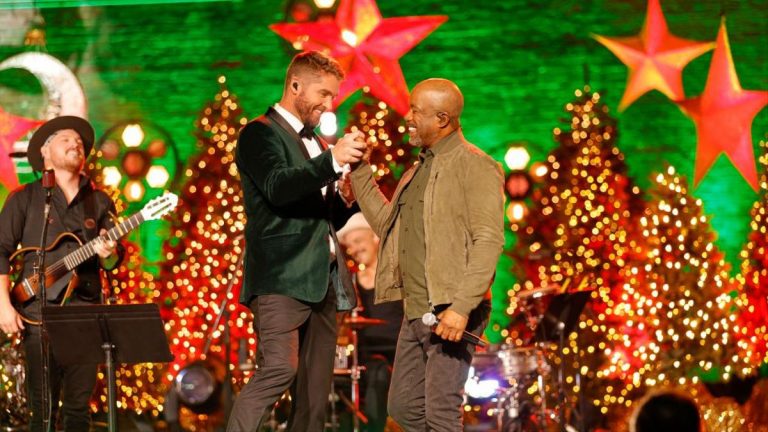 Brett Young gained a whole new level of respect for Darius Rucker when Rucker swooped in to join him on “Rockin’ Around the Christmas Tree.”

The song is featured on his “Brett Young & Friends Sing the Christmas Classics,” which the singer released this fall. Young said Rucker was in and out of the studio so fast “it was almost like he was never in the room.”

“Darius is just so good at what he does,” Young said. “He spent more time driving to the studio and from the studio than he did in the studio. That’s how quick he sang the vocal on this record. He came in, he was ready, he was excited, and he had things to do. He just slammed it and was out the door as soon as we had what we needed.”

Young said it was a moment as an artist where he became a fan of Rucker as a professional and a singer.

“Like through the roof,” Young said. “He was in and out, and he crushed it.”

However, “Have Yourself a Merry Little Christmas” featuring Sam Fischer is Young’s favorite song on the album.

Other songs on the album include “Silent Night” with Chris Tomlin, “White Christmas” with Colbie Caillat, and “The Christmas Song (Chestnuts Roasting on an Open Fire)” with Phil Wickham.

Young and Brett Eldredge released Christmas albums on the same day – Oct. 22. Young compared track listings and was thrilled to discover there were no repeats between his “Brett Young & Friends Sing the Christmas Classics” and Eldredge’s “Mr. Christmas.”

“Brett can have his lane, and I can do my first Christmas album,” Young said. “We’re not stepping on any toes.”