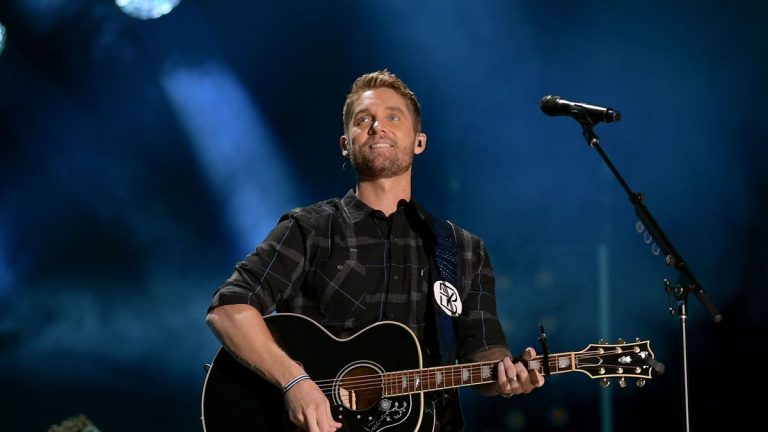 In case you didn’t know…Brett Young is the ultimate girl dad.

Country music star Brett Young recently caught up with Big Machine Label Group to share what it has been like to raise two daughters with wife, Taylor Mills Young. The California native and his wife share Rowan Marie (9 months) and Presley Elizabeth (2) together. Since growing his family, Young has proved that he has caught a bad case of baby fever.

The “Mercy” singer told BMLG that he has grown to love “girlie things” and often offers his brunette locks to play hair salon.

“She hasn’t gotten to the age yet where she’s asking to paint my nails,” Young shared. “I’m sure that’s coming soon. But she was brushing my hair yesterday.”

The father of two continued to mention that he even learned exactly how Presley wants her dollhouse to look.

Although the chart-topping musician’s life has changed drastically within the last few years, Young voiced that he wouldn’t change it for the world and now playtime with his daughters is nonnegotiable.

“It’s limitless to what you’ll do when your daughter starts the conversation with, ’Will you play with me daddy?’ The answer is yes,” he says, “no matter what’s goin’ on,” he stressed.

This was not the first time Young had expressed his love for fatherhood. In fact, he told E! News that Presley influenced his artistry and inspired his children’s book, “Love You, Little Lady.” Young’s new perspective on life is evident in his 2021 collection, “Weekends Look A Little Different These Days.”

“If I wasn’t careful, fatherhood would have inspired all of them, and we would have had a lullaby record,” Brett jokingly said to the outlet. “In terms of the song writing, it put me in a position where I had to actually stretch myself pretty far and not just write about what today was like or what I’m feeling right now. It made me realize that there was a huge audience of people who had fallen in love with the first record, specifically songs like ’Mercy’ where it broke their heart.”

Young pointed out that becoming a father and writing about his experience, allowed him to reach a new fan base.

“It stretched me as a writer in a really good way, but it also allowed me to explore a completely new fan base of people and parents because I didn’t have those songs either,” he concluded.

Although, Young is in a happy and healthy marriage – the hitmaker told BMLG that he pulled from a real-life experience to pen his latest single, “You Didn’t.” On the heels of Young’s 7th career No. 1 hit, “Lady,” he recalled when he and his wife took a break before they tied the knot.

“Me and Taylor, my wife, were broken up for two years and then got back together. The most painful break up I ever went through was when I broke up with her, and so that’s where I went when we wrote this one,” he said. “I’ve written break up songs about my wife when we were broken up. But this is the first time I’ve written a break up song about my wife when we’re back together, and everything’s good,” he concluded.

Young is expected to bring his relatable anthems out on the road on April 28 in Alabama and will wrap up his run in Wisconsin at the end of May. Fans now have the opportunity to purchase a VIP package to hang backstage with the family man. For more information, concert-goers can head to brettyoungvip.wun.io.