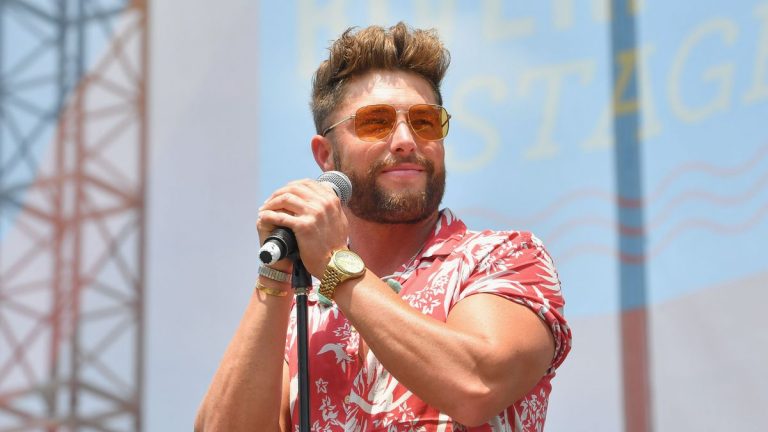 Tequila on ice with a splash of lime Topo Chico Hard Seltzer is Chris Lane’s drink of choice before every show. Ahead of Lane’s performance at Joe’s Live Rosemont in Chicago (March 25), CMT sat down with the hitmaker to hear first-hand about his experience on the Fill Them Boots Tour, his forthcoming third studio album, and his secretive collaboration in the pipeline.

“We were dying to get back out here,” Lane told CMT inside his decked-out tour bus. “It felt incredible just to be back in front of people, seeing so many smiling faces and hearing everybody sing along to the songs. We missed it for almost two years…nothing is better than the connection you get with fans face-to-face and seeing people in a room.”

The multi-platinum artist embarked on his nationwide tour alongside breakout stars ERNEST and Lily Rose back in October of 2021. Tyler Rich recently replaced the “Flower Shops” singer out on the road, and the Chicago concert served as his first stop on the multiple city trek.

Although Lane has been touring for quite some time, he shared with CMT that he still gets emotional when he receives a positive fan reaction during his set.

“My song ‘I Don’t Know About You’ has been the biggest song in my career. I think every night I sing that song is always a ‘pinch me moment’ and just how loud the crowd sings it. You sit down in the writing room and try to write every song to do that…and it’s incredibly hard to do that,” he stressed. “To find a song and have a song that connects in that way has been a dream come true, and it changed my career.”

The chart-topping artist continued to credit several notable Nashville names who have changed the trajectory of his career.

“I was lucky enough to have Florida Georgia Line, who gave me a lot of chances at the beginning of my career,” he recalled. “They took me out on their biggest tours. I got to play Wrigley Field, got to play Fenway Park, got to play all these massive ballparks, stadiums, amphitheaters, and arenas. That helped me take a massive step in my career,” he added.

Lane pointed out that one person or a gig could become a musicians golden ticket to stardom.

“Sometimes it takes getting on your first tour to get to that next step. Obviously, you want to play in front of as many people as possible,” he said. “I mean, Dustin Lynch did the same for me…he took me out on his first headlining tour. Whether you make one fan or make a hundred fans – you’re still making fans. Country fans ride with you for a long time, and that’s the best part about country music…they are so loyal.”

The vocalist mentioned that he would watch FGL interact with their audience and pick up on their performing style early in his career. While on tour with the award-winning duo, Lane said he would try to intertwine what he learned into his set each night.

“I learned a lot of everything I know about this industry from them early on. I think for me, it was performing live. I watched them get on stage every night and just have so much fun, not worry about if they messed up the words or not. They didn’t take it too seriously,” he explained. “The crowd feeds off that energy. Early on, I was always so nervous when I would get on stage. It takes time to learn how to work a crowd and all that. So, I think for me, not thinking about it too much, not taking yourself too seriously, but just get up there and have a good time – the crowd always feeds off of that.”

With several A-listers as mentors and with his performing approach down pat, he shared that he is now focusing on writing and getting into the studio to record new music.

“I think a dream collaboration for me in the country world would be Kenny Chesney. I’m a die-hard Kenny Chesney fan. I’m going to try and speak this into existence and hope that it happens one day,” he laughed. “He’s an idol of mine, and so is Tim McGraw. I would love to do a song with him and be in the studio with them one day,” he mentioned before revealing details about an upcoming collaboration.

“I’m working on a collaboration right now. I’m not going to say with who. There is one song that I am incredibly excited about that I am hoping comes out within the next month,” he said full of excitement. “It’s up-tempo, and It feels great. It’s a play-off of an older song, in a way. It’s hard to explain, but people will understand when they hear it.”

Although Lane did not go into much detail about his upcoming duet, he did confirm that his third studio album is on the horizon and in progress.

“I’ve been writing as much as possible. This is going to be my third record. So, I’m just trying to make sure that I get every single song right. Some of the songs I’ve released may go on it, and some may not,” he clarified. “A record’s coming, and it probably won’t be a bunch of songs about being a father, but I think just about life. If there’s one thing I love is summertime-style country songs. I think that’s the theme that I will constantly stick with no matter what I record.”

The singer-songwriter did not fail to mention that he will be pulling from his musical influence Kenny Chesney to pen his next project and will try to stick with “up-tempo” melodies because “they always win.”

Lane has “Big, Big Plans” for 2022, as he plans to release the collection sooner than later.

“I think that’s my main goal in 2022, is to get out an album. No matter what time of year it is – just get it out there and make it be the best one yet,” the country crooner concluded.