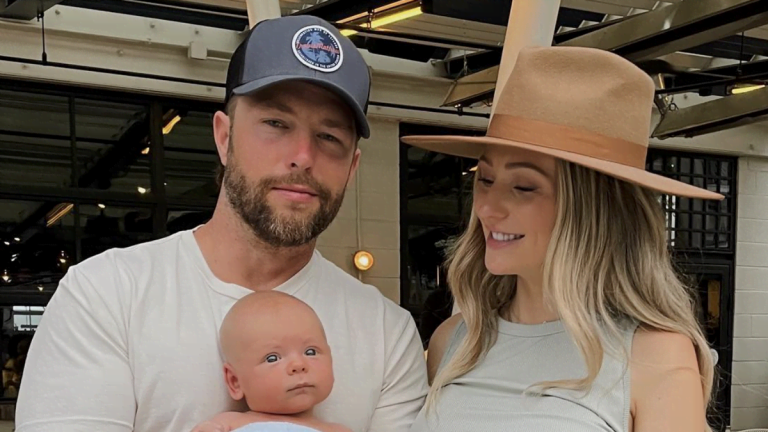 Country music star Chris Lane had some “Big, Big, Plans” for his son Dutton’s first Christmas, until he fell ill with the Coronavirus. The hitmaker has vocalized his road to recovery, as he still feels fatigued.

After wrapping a few West Coast shows on his Fill Them Boots tour, the singer took to Instagram to share that he is “a little tired” but confirmed that he would be “ready to rock this weekend” with openers Lily Rose, ERNEST, and Tyler Rich.

The vaccinated 37-year-old previously spoke to PEOPLE about his fight against COVID-19 over the holidays and touched upon what it was like to take care of his newborn son during those challenging times.

“It was kind of strange,” Lane told the publication about his early symptoms. “I woke up In the morning, and I didn’t feel sick, but I had some crazy back pain. And then a couple of hours after that, my whole body started feeling super achy,” he added.

After feeling under the weather, Lane took it upon himself to protect his family and others by taking multiple coronavirus tests – before moving forward with his everyday duties. The singer said he tested negative twice before he received his first positive result.

He continued to reveal that the body aches were the side effect that slowed him down the most, and declared that he luckily did not experience any other symptoms besides a cold towards the very end.

“The body aches and back pain was really the worst part,” he said. “And then, at the very end, I got a little congested, but that went away a couple of days later.”

While overcoming the virus, he told PEOPLE that he managed to stay far away from his wife, Lauren Bushnell, and son Dutton. He confirmed that he refused to hold his 8-month-old baby before obtaining numerous negative results.

“I had been getting negative tests after the symptoms had gone away, so I was holding Dutton and still trying to do daddy duty, but then she started feeling bad,” Lane said while explaining that he might have passed the virus to Bushnell. “She only had two days of symptoms. She never tested positive, but she 100% had to have had it. She definitely felt bad for two days, and then she was completely fine after that.”

Lane openly shared that the last few months have felt like a whirlwind to him and the Bachelor alum, as they have been recovering and not sleeping. According to the multi-platinum artist, the two have been alternating shifts with Dutton at the wee hours of the night.

“It’s been really hard because our little man does not like to sleep very well,” he admitted. “He’s starting to get it figured out now, but a couple of months ago, we were like, ‘There ain’t no way we could even consider having another one.’”

After months of practice, the “Fill Them Boots” singer acknowledged that they are finally getting the hang of being parents and adjusting to their new normal.

“Now I understand how people say that you forget how hard those first five or six months were,” Lane said before sharing that Dutton now has his own designated area on his tour bus with full-fledged crib built-in.

Lane mentioned that baby number two is already a topic of conversation in his household.

“Now I think that potentially we will do it again. We’re already talking about it,” Lane declared while also pointing out that Lauren was destined to be “a mama’s boy” and has been the ultimate superwoman the last few months.

“Watching Lauren be a mom has been the best thing in the world,” gushed Lane. “She’s got it down pat, even when she felt like she didn’t know what she was doing. She is seriously the best mom. Just when you don’t think that there’s any way you could love somebody more, I feel like I’m finding a new way every single day.”

Talks of having another child is surprising, as the award-winning musician has recently confessed that he never wanted to have children.

“I never wanted kids,” Lane told Entertainment Tonight. “I honestly never wanted to get married. None of that.”

However, his plans and perspective quickly changed once he got together with the reality star. Earlier this month (Feb.3), Lane told ET reporter Cassie DiLaura that the two would like to make Dutton a big brother and hope that they could bring a baby girl into the world one day.

“I know Lauren wants a little girl eventually,” he said, full of excitement. “So, I want that for her. I prayed hard for a little boy, and I have that. So, now I want what she wants.”

As the two channel their energy into growing their tight-knit family, Lane will also be keeping up the positive momentum on his Fill Them Boots tour until April. Lane is expected to appear at several festivals across the U.S. all summer long following his tour. Tickets are currently available for purchase, here.