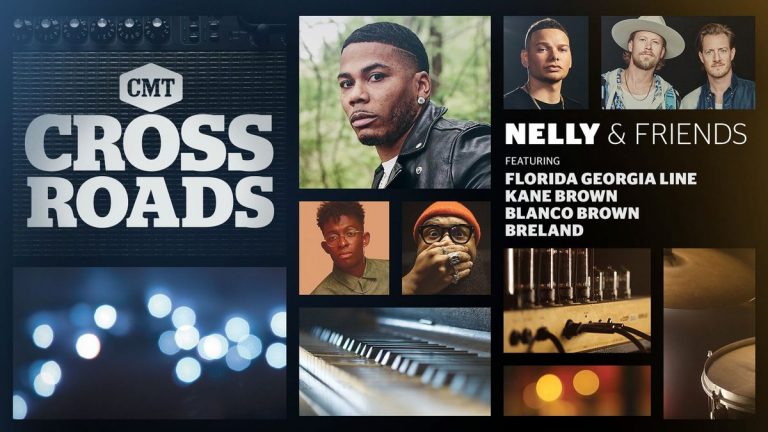 The latest CMT Crossroads will premiere — with 3XGrammy-award-winning rapper Nelly as the headliner — on Wednesday, September 1st at 10p/9c exclusively on CMT. In celebration of the August 27 release of his eagerly anticipated Heartland EP, the multi-platinum selling superstar will highlight over a decade of successful explorations of his appreciation of country music alongside well-regarded Nashville performers Florida Georgia Line, Kane Brown, Blanco Brown and BRELAND.

“I’m excited to celebrate my music with my friends and fellow artists on Crossroads! When people talk about me crossing lines and genres, I think about it more that music brings folks together.” Nelly makes his Crossroads debut as the series’ first hip-hop headliner, but that doesn’t mean that he’s a newcomer to the genre. The rap superstar first burst onto the country scene with “Over and Over,” his groundbreaking duet with Tim McGraw in 2004, making history charting on multiple charts, including the Rhythmic, Adult Top 40, and Hot Rap.

The 60-minute “CMT Crossroads: Nelly & Friends” special features new music from Heartland alongside performances of Nelly’s biggest chart-topping hits, including a few surprises celebrating the 20th anniversary of the hit “Country Grammar.” In addition to Nelly, this marks first-time appearances from Kane Brown, Blanco Brown, and BRELAND on the Crossroads stage; Florida Georgia Line returns to the legendary stage after teaming up with Backstreet Boys for a much-acclaimed episode in 2007.

“CMT Crossroads” shows the far-reaching roots of country music by pairing country artists with musicians from other genres. Each episode features a different set of stars playing together, swapping stories, and sharing their common love of music. The series debuted January 13, 2002, with Elvis Costello and Lucinda Williams and since has showcased dream musical partnerships including Ray Charles and Travis Tritt; Kelly Clarkson and Reba McEntire; Def Leppard and Taylor Swift; Alicia Keys and Maren Morris; Halsey and Kelsea Ballerini; and most recently, Nathaniel Rateliff and Margo Price.