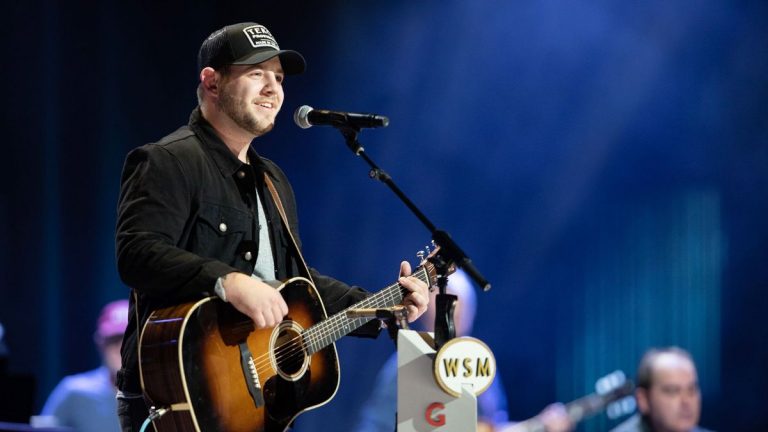 Nearly 300 million streams, including RIAA gold-certified breakup anthem “Giving You Up,” plus a recent debut at the Grand Ole Opry, and Kannapolis, N.C. native Kameron Marlowe is still humbled that he’s able to make songs that reflect his youth, and how he became a fan of music.

“Just like my mother, I’m a’90s and 2000s country fan, but my father listened to ’80s and ’90s rock, punk rock, and stuff like that,” he said during a Friday morning conversation with CMT. He’s hard at work on a forthcoming album, but in the interim, he’s releasing “Steady Heart,” a new single that he eagerly notes is “[his] favorite that he’s ever written.

“She’s a candlelight in all my dark / When we come together, we’re the best of who we are,” sings Marlowe on the song co-written by his frequent collaborators Jessi Alexander and Dan Isbell. In the recording process, Nashville veteran and pop-country icon Dann Huff is also present. He counts songs as diverse as Whitesnake’s 1987 heavy metal classic “Here I Go Again” and Lonestar’s two-decade-old country-crossover anthem “Amazed” amongst his catalog of mega hits. This conversation with Marlowe touches on the creative process behind the rising country star’s latest single, plus how he maintains his creative flow and thoughts about his small and large, short and long-term aspirations.

Marcus K. Dowling, CMT: So, “Steady Heart.” How does this song symbolize where you’re at right now as a songwriter and your career, in general, at present?

Kameron Marlowe: I’ve been songwriting for quite a long time now. These days, I’ve got lyrics written everywhere. They’re on my phone, my iPad, pretty much all over the place. Every day is different when you go into a writing room, though. But these days. Every song is a battle to beat the last song that I’ve written. The chorus comes first some days; other days, it’s the verses. The day I wrote ’Steady Heart,’ we started with the verses. We started with ’she’s a glass of wine on the back porch, and I’m a bourbon in the bar.’ From there, we knew exactly where ’Steady Heart’ was going, and we were stoked about it. It’s a really special one because it’s a love song and love story, plus how I can highlight how my family — my parents and grandparents — have been together and married for so long.

CMT: Who and what is keeping your motivation high these days? Also, what’s the most challenging part of maintaining that and being in Nashville as an artist, in general?

KM: Making it to my 11 AM songwriting sessions is hard enough! No, but really, the hardest thing about being in Nashville is losing your inspiration. Maintaining your creative inspiration — especially as a songwriter — is difficult. But working with guys like Dann Huff, who recorded “Steady Heart,” makes [keeping your inspiration high] worth it. First, I came in playing an acoustic guitar with the song written, then he played a way cooler guitar lick than I was playing, and the band that played the session got involved. The way [“Steady Heart”] developed is a testament to Dann’s ability as a producer. I’m very blessed to have had [his assistance].

CMT: You’ve just gotten off the road with Brad Paisley. What about touring with Brad was the most significant takeaway for you? As well, was there anything particularly powerful about that run of shows?

KM: Brad’s got a great stage presence and energy that never drops throughout the show. While on tour with him, I had the first few times where the fans sang my lyrics back to me while I was on stage. That was a wild, unforgettable, and breathtaking experience. You put so much time into the art of songwriting, and when someone connects with your personal story in a song, it’s a feeling that I can’t compare to anything else. Coming from a small town in North Carolina, I never thought that something like that would ever happen.

CMT: So, Kannapolis. It’s going to be great when you get the chance to go back home and play for family and friends. Have you thought about that? Where would you ideally like to play?

KM: There’s a Single-A minor league baseball ballpark in the middle of town, and I would love more than anything to play to a hometown crowd there. Or, there’s the Gem Theatre — there’s so much history in that room. I saw everything there growing up, from movies to plays, everything. So I’d love to go back home to play for my friends and family, yeah.

CMT: Past “Steady Heart,” take me into the songwriting room for you these days. What’s another song you have coming, and what stands out the most about it for you?

KM: I just wrote this song called “The Beginning In The End” with Josh Osborne. It’s based on the idea that when something ends — a life, a relationship, a job, anything — you have to find a new beginning in that. In the chorus, we wrote, “We’ve all got a story to tell, we’re all chasing heaven while going through hell, and we all want someone or something else, and we just don’t know until we get it.” To me, it symbolizes that we all have our baggage, but that once we set [our emotional baggage] down, we find something better. It’s all about not getting caught up in the hard spots in life but always trying to push through them. I think it [has the potential] to be a powerful song.