CMT INTERVIEW: Mickey Guyton On “Remember Her Name,” Self Discovery, Motherhood, And More 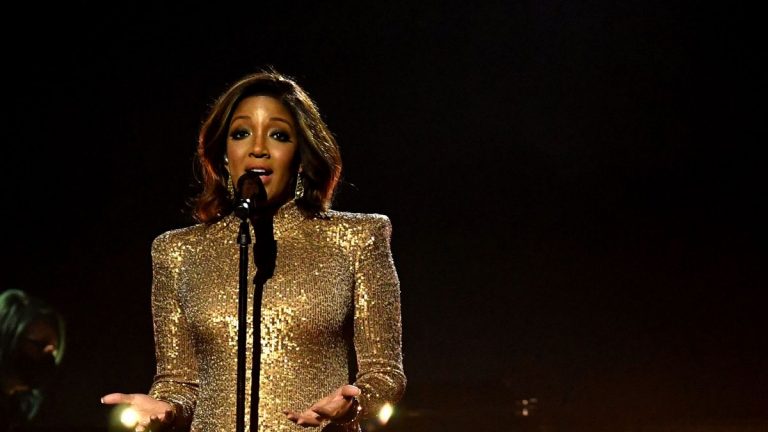 “The person that needed me the most was me,” says Mickey Guyton about the most powerful lesson she’s learned that’s carried her through what has been both the proudly highest-profile and also pain-filled and emotional year in her country music career. Regarding her very long-awaited debut album Remember Her Name, it’s a project that’s as much a showcase of a decade of hard work as it is, in many ways, a legacy piece for her, her husband Grant, and their newborn son, Grayson. In regards to it, she continues, “I wanted to make an album that, foremost, I alone would be proud of, then I would be proud to press play for my child to hear one day. Second, I wanted every word of every song that I wrote to reflect me honestly. Until working on this album, I’d done my music career everyone’s way except for my way.” Moreover, about all things equity in country music and being regarded as the most visible African-American leader in the burgeoning movement, the “Black Like Me” vocalist says that her call to leadership was “not on the agenda,” but was more heaven-sent. The veteran star says that “God felt that [leadership] was something that I could handle,” because — as she often repeats while talking with CMT — “if I don’t do this, who will?” In general, an interview with Guyton offers a sense of studying the simultaneous paths that creativity and courage take to manifest honest work within an artist, and intriguingly, when you’re a Black woman in country music, how long — and incredibly fulfilling that journey is.

Marcus K. Dowling, CMT: So, as far as this album, what would you define as its most powerful personal and creative statements it makes about where you are now as both a person and a creative? What about where you are do you think is the most connecting thing to both fans and other artists?

Mickey Guyton: This album represents my self re-discovery — as a person and artist — via lessons, both good and bad. That’s [another] reason why it’s called Remember Her Name. When I first started in music, you couldn’t tell me that [my career] wouldn’t work. But then, life happened, and I completely lost myself as an artist. Everyone else’s opinions [of me] got in my head, and I was trying to meet everyone else’s needs. This album helped me realize that I needed to let go of the idea that I wouldn’t be accepted by every part of country music, or by everyone, in general. Instead, I focused on what I truly had to say about who I am on this record. I hope the freedom that making this album allowed me to experience encourages other artists to do the same.

CMT: So you rediscovered yourself while simultaneously also creating another human. I can’t imagine creating wither from that perspective or just physically, in the midst of that. What about crafting this album while pregnant, improved or significantly altered your process?

MG: Pregnancy wasn’t in the plan! But again, God gives you exactly what you need at the exact moment. So now, I know that I needed this beautiful boy to take my mind off the industry’s pressure and put that energy [that I used to use to worry about that] into this precious human. Also, recording and singing with a baby in your belly is a lot! When I first found out that I was pregnant, the first trimester was the hardest for recording. I’d tell my producer Karen [Kosowski], that I could record at 1 PM. Of course, at 1 PM — on the dot — is when morning sickness would kick in for me. Then, in the final trimester, I had to learn how to sing with a six-pound baby in my belly. While recording the song “All-American,” for instance, there was no room for my diaphragm, so I had to wait for certain times of the day to record. If I had just eaten, I literally couldn’t sing “All-American,” because my voice couldn’t hit those notes because of the food and my child getting in the way of my diaphragm. So, when you hear that song, you’re hearing me singing it when I haven’t eaten.

CMT: At times, the sounds and songwriting on this album definitely represent what I’d consider being an evolution of your work. What do you feel were some unique highlights of the album process that showcase places where you developed some new creative ideas?

MG: To be perfectly honest with you, I have major imposter syndrome, so my expectations for this album were pretty low. I didn’t think about how to elevate my craft, push myself, or anything. I wanted it to be as conversational as possible, make people feel hope. So, I’m happy about songs like “Lay It On Me” and “Smoke,” which I believe have the greatest crossover potential. “Smoke,” in particular, is a country-trap song that is so much fun. Someone also taught me about seeing and hearing colors (a process known as synesthesia) when they write and sing, and I had never really thought about music like that. So I tried that on this album, too. So you hear these songs that feel like blues, magentas, purple, red, indigo, maybe a little bit of orange. Though I had no formula for it, this album is a blend of all incredible feelings.

CMT: That’s incredible. So, releasing a debut album this deep into your career, I can only imagine, involves looking at a body of work as a songwriter that is just so voluminous that it’s hard to choose. Maybe there are songs you’re “hanging on to for an album one day,” I don’t know. So, take me into the process of old songs versus new, and what went into your mindset, choice-wise?

MG: Frankly, at a certain point, you’re just writing to survive as a creator and artist because nobody is calling you back, saying, “oh my God, this song is so great, we have to record it.” So I wasn’t “hanging onto them” for this album or anything. So, ultimately, this album is still full of amazing songs like “Do You Really Wanna Know,” which are four and five years old! But, “When Are You Gonna Tell Her” was the first song that I wrote [recently], where I felt like people were finally starting to “hear” my songs and take them seriously. And I’m sitting there like, “well, yeah, you’ve been needing to take me — and these songs — seriously for awhile, now!” The whole process was mind-boggling!

CMT: Speaking of being able to get your songs heard finally, there’s one, “Love My Hair,” that resonates in a way that foremost, pop-country’s never had a song like it, and second, it feels intensely personal. Can you take me into what the recording process was like for it, and if you were met with any push-back?

MG: No push back at all! There was no question. When I wrote the song, I immediately sang the demo and recorded it with an outstanding Canadian producer named Johnny Simmons. When I sang it, he got it immediately. I think we discount people’s capabilities to understand you when you effectively get across what you’re trying to say in a healthy way. Aside from “Love My Hair,” people were waiting for something different, something — in general — besides beers and trucks.

CMT: There’s reason to believe that this album — given that it’s one of the first records significantly influenced by America’s racial upheaval in 2020 — will serve in some way to impact how people may think about Black equity, social justice, and how country music can mirror America in solving for it. What are your thoughts in regards to that statement?

MG: When I first got signed ten years ago, I wanted to make an album just like everyone else. But, ten years later, after seeing Nashville’s flaws, I’m instead making an album that I hope continues the conversation about people of color gaining equity and increases opportunities for other artists of color to succeed in country music. Because I don’t always see the change that is happening, I’m often wondering, “I’m pushing for change, but are people really wanting it?” But then, I have moments and see things evolving. That inspires me to continue to advocate for not just Black artists but all marginalized artists, to be able to have opportunities to make music in what is such a beautiful genre. A country music industry that embraces inclusion can be more beautiful — by being healthy and good — than it already is. Country music may have been slow to embracing inclusion, but I think that, as a whole, more people who work in and love this music want this evolution towards acceptance to happen.