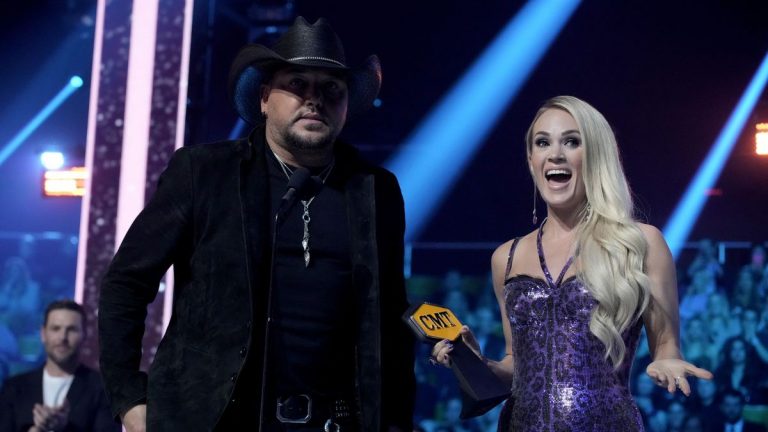 The CMT Music Awards’ most decorated artist just got a few more buckles to add to her mantle.

Jason Aldean and Carrie Underwood took home two belt buckles at this year’s CMT Music Awards for their hit duet, “If I Didn’t Love You.” The duo had already won Collaboration of the Year earlier in the night.

When the nominations for this year’s CMT Music Awards were first announced the Video of the Year category had 12 nominees, and fans voted for their favorites on social media, with the top three acts — Cody Johnson, Jason Aldean & Carrie Underwood, and Kane Brown — making the final round going into tonight’s ceremony.

“Thank you fans, this belongs to you,” Underwood said onstage as she held her award. “We already thanked everybody who worked on the video… This is all about the fans, thank you! Thank you, CMT!”

Aldean then stepped to the mic and said how even though he’s been making country music for 17 years, this is the first time he has won Video of the Year at the CMT Music Awards.

“This is pretty amazing for me. I think Carrie and I hit [the scene] about the same time,” he said. “And the fact that you guys still care about us this many years into our careers to vote for us… means the world to me.”

“This has been a great night, great song, and I’m pretty sure I picked the perfect partner for this song,” Aldean added.

You voted.
They won.
WE’RE CELEBRATING.

Congratulations to @Jason_Aldean and @carrieunderwood on winning Video of the Year at this years #CMTAwards! pic.twitter.com/t2K55CqjEO