CMT Premiere: BELLES Put Cheaters on Alert with ‘He Gave Me a Ring’ 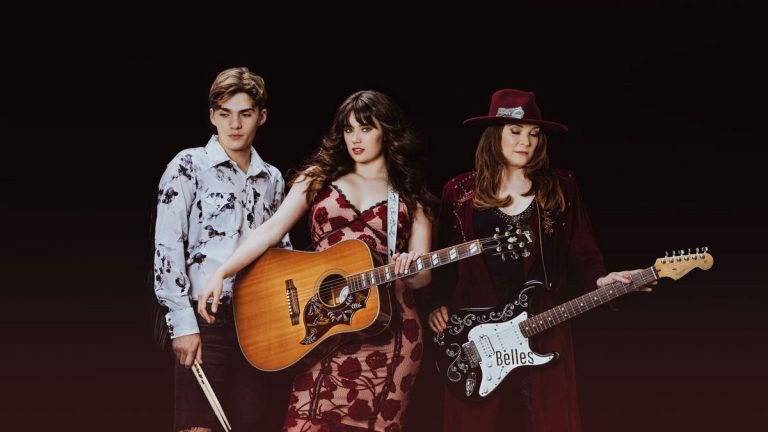 Family trio BELLES wasn’t afraid to suffer for their new music video for “He Gave Me a Ring,” which debuted today.

The trio’s singer Kelli Belles said the group was together in their hometown of Omaha, Nebraska, for the holidays, so they decided to shoot the video a few days after Christmas. The temperature was 10 degrees.

“We were all freezing during the outside shots,” she said. “We were on such a time crunch because of leaving for tour with JoJo Siwa in early January that we had to just power through the cold weather. Then at the end of the shoot, I got to get in a warm bathtub wearing a wedding dress!”

Justin Wantz produced the video, and Taylor Wink directed the clip for “He Gave Me a Ring. Belles wrote the song with Mark Narmore and said a true story inspired it.

“The lyrics to this song just flowed out of my brain during this session,” she explained. “We wrote the whole song in about 20 minutes. To me, I always had a clear vision of what I wanted this video to look like because the lyrics are very visual. So, when meeting with our amazing director, Taylor, I expressed that I wanted this video to show the story of this breakup that I lived through. She accomplished this perfectly.”

Wink said working with BELLES on two projects has been “a dream.”

“They are always open to my ideas of how to push the envelope farther and create a story that coincides with Kelli and the band’s heartfelt lyrics,” she said. “With this music video, I wanted to help solidify what their sound is and convey that visually. I got a lot of inspiration from Miranda Lambert and Little Big Town music videos that show strong women coming into their own post a volatile relationship. With the help of an amazing crew, I felt secure and confident in my stylistic choices to help bring this song to life.”

Since she posted the song on TikTok, Belles said that it has racked up more than 7 million views and 2 million likes.

“I knew my fans loved this song, and I really wanted to create a music video that did the song justice because so many people relate to it,” she said. “I also wanted to push myself in my acting on screen and really show the heartbreak of this situation. I’m so grateful to Taylor for getting me out of my comfort zone and coaching me through those tougher acting scenes. I’m proud of this video because it walks the balance of showing vulnerability in the hurt but yet strength in how the story resolves. I want this video to inspire fans to stand up for themselves and know what they deserve in relationships.”

The singer said the “He Gave Me a Ring” video looks “exactly how I pictured it.”

“I feel this video shows a lot of growth and sets up our new recording project as I’m going back into the studio in April after the tour,” she said. “I hope my fans really enjoy this video.”