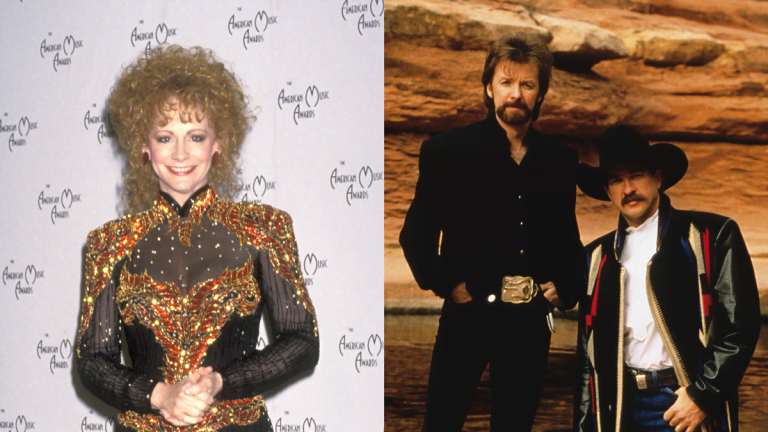 1991 is a year in country music caught directly amid country music’s mainstream crossover between the countrypolitan and neotraditional eras reigning supreme. It was also a time when multimedia innovation exposed acts to an unprecedented blend of commercial glitz and video glamour that yielded mega-sized success. Thus was the case for two acts who closed out the year at the top of the charts, Reba McEntire and Brooks & Dunn. Intriguingly, though ultimately different, the former’s single “For My Broken Heart,” and the latter’s hit “My Next Broken Heart” were the last two Billboard Hot Country Song chart No. 1 tracks for the year. Though both songs deal in heartbreak when considering what lay beyond for both acts, it’s a case of the darkest hour being before the brightest dawn for the song’s performers and those around them, too.

The seasoned songwriting trio of Ronnie Dunn, Kix Brooks, and Don Cook penned Brooks & Dunn’s “My Next Broken Heart,” the September-released follow-up to Brand New Man’s title track. Like Brooks & Dunn, Cook was a songwriter affiliated with Tree Publishing who had already achieved a measure of industry success via “Tonight,” a top-five hit for Barbara Mandrell in 1977, plus No. 1 single “Lady Lay Down” a year later for John Conlee.

Like much of the album’s content, it’s based on a vibe directly related to the idea of recovering from a breakup by moving onto someone else, typically by going out for a honky-tonking night on the town. The lyric, “I thought all along you’d be the death of me / But I found one tonight who wants what’s left of me,” as performed by Ronnie Dunn, notes the slight tinge of devil may care humor one tends to have before willingly risking suffering heartbreak again — if only because the story behind how it will likely occur will be worth the sadness after that.

Though unified by the words “Broken Heart” in the title, Reba McEntire’s “For My Broken Heart” has a profoundly different origin story. Her December 1991 chart-topper is from a similarly-titled album that was her first album recorded after an airplane crash that killed most of the members of her touring band. Thus, the recording is, as McEntire states in the album’s notes, “a form of healing for all our broken hearts.” Songs including her cover of Vicki Lawrence’s 1972 hit “The Night The Lights Went Out In Georgia,” “The Greatest Man I Never Knew,” and “Is There Life Out There” were chosen to mirror this album’s narrative theme.

A decade into life in a “ten-year town,” “For My Broken Heart’s” co-writer Liz Hengber finally achieved success with the single she penned for McEntire six months after signing to her (and then-husband Narvel Blackstock’s) development company Starstruck Entertainment. “Liz was a pretty good waitress, and she’s a wonderful songwriter,” noted Amy Kurland in the foreward of Hengber’s 2006-published book, The Do’s And Don’t’s Of Music Row the founder of Nashville’s legendary Bluebird Café, described by PBS as a “perennial outlet for talented Music City songwriters and artists to debut new material and earn new fans.”

McEntire originally planned the song as a duet with Clint Black. However, he was unavailable when she went into the studio to work on the album. Notably, one look at the track’s cinematic, Jack Cole-directed video clip highlights where this actually could’ve led to even greater success for the song. Rainy nights accompany a younger woman sitting at a corner booth at a cafe, a middle-aged woman in her apartment, and an elderly woman — also in an apartment — lipsyncing to McEntire lamenting that she was “so sure life wouldn’t go on” under the stress of heartbreak, but then realizing that “the world didn’t stop for my broken heart.” Adding in Black alongside McEntire, like say, her 1986 breakout track “Whoever In New England,” is something to ponder, for sure.

However, the success that “For My Broken Heart” yielded for the album of the same name proved that heartbreak, on many levels, occurred just before incredible acclaim. McEntire was nominated for Entertainer of the Year, Female Vocalist of the Year, Album of the Year, and Music Video of the Year at the 1992 Country Music Association Awards, plus a Best Female Country Vocal Performance nomination at the 1992 Grammy Awards. At the 1992 Academy of Country Music Awards, she won twice in the Video and Female Vocalist categories. The latter win, she dedicated to her “eight buddies” who had tragically passed and inspired “For My Boken Heart.” “I think country music has got some of the best people in it,” McEntire said, offering gratitude to those who supported her in the months after the crash. “I want you to know it means the world to me.”

Moreover, for the song’s writer, Liz Hengber, she composed three more Billboard top-five country hits for McEntire — “It’s Your Call” (1993), “And Still” (1995), and “Forever Love” (1998). Moreover, she became a high-ranking member of the Nashville Songwriters Association International, wrote hits for a dozen other Music City stars, plus wrote the previously-mentioned The Do’s And Don’ts Of Music Row, still considered by many to be essential reading for every aspiring songwriter or college student entering the country music industry.

Concerning “My Next Broken Heart”’s co-writer Don Cook, he was also the lead producer of Brooks & Dunn’s debut album. His ability to write and produce songs about beer-soaked one-night heartbreaks and more led to that album selling six-million-plus copies. It also spurred a successful career wherein he worked with Alabama, Conway Twitty, George Strait, Vince Gill, Waylon Jennings, and more, plus being named Chief Creative Officer and Senior Vice President of Nashville’s Sony/ATV/Tree Music Publishing in 1994.

Again, though both these 1991 No. 1 hits deal in heartbreak, they also spurred brilliant, career redefining success for all parties involved.