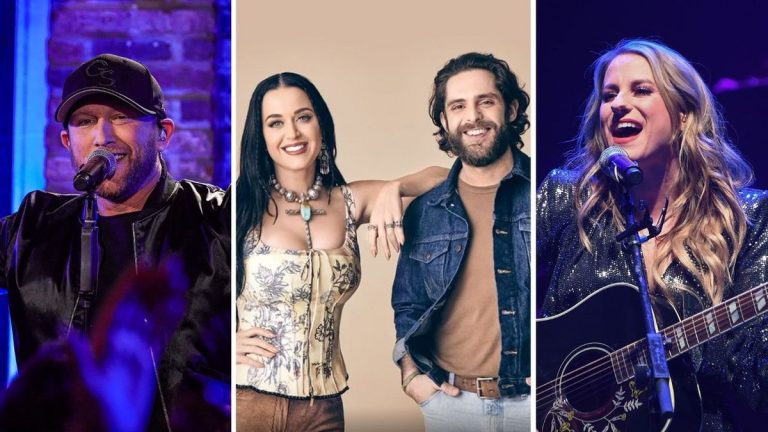 Fridays are for new music, and this week some of the biggest names in country music reached outside of the genre for some memorable melodies, stunning harmonies and unexpected grooves. Billy Ray Cyrus teamed with Snoop Dogg and The Avila Brothers, and Thomas Rhett collaborated with Katy Perry while Ashley Cooke kept it all in the country music family with her Brett Young duet.

“So much purpose in this song,” Cyrus said in a statement. “Music is the common denominator that can bring all people together from different generations, backgrounds, genres, languages or geographical diversities. It’s the universal language we all understand.”

“The record we created puts the focus and value back on hard work,” said The Avila Brothers in a statement. “Together, we collectively illuminate, celebrate, and honor those around the world that have continued to show up every single day, keeping our world moving. Music transcends boundaries and is responsible for bringing the colorful world of The Avila Brothers, Billy Ray Cyrus and Snoop Dogg together.”

Cole Swindell, “Stereotype”: The title track from Swindell’s upcoming fourth studio album, “Stereotype,” is an instant contemporary country classic that utilizes clever wordplay to emphasize that you can’t judge a book by its cover.

Written by Swindell, Michael Hardy and Jordan Schmidt, “Stereotype” is a breezy, mid-tempo, melody-driven bop that includes the lyrics: That’s my little rock ’n’ roll right there|Crank ’til the speakers blow, I swear| Saying, “Don’t be a girl, boy, let’s take another shot” |Dance with me now, making out in the parking lot|Down home angel with a whole ’nother side| She’s the “Oh no, there she goes” turning up my stereo type

The album, available April 8, is also home to Swindell’s 10th No. 1 hit, “Single Saturday Night,” his current single with Lainey Wilson, “Never Say Never,” as well as “Some Habits,” “I’m Gonna Let Her,” and the HARDY duet “Down To The Bar.”

“Where We Started” is a genre-stretching mid-tempo that pairs country storytelling with progressive production and vocals that weave between pop and country while showcasing Perry’s sky-high range and the textured tone that makes Rhett’s delivery undeniable. The song showcases the kind of production and harmonies that keep the song interesting time and again.

“Having Katy Perry featured on this was mind-blowing to me,” Rhett said. “Alison Jones at the label sent it to her, and she was immediately like, ’When do I put my vocal on it?’ I’m sitting there going, ’Really?’ I’ve always been such a fan of hers. To have her on here really escalated the emotion of that track. It’s a song I think a lot of people are going to relate to and a lot of people are really going to enjoy.”

To keep up the positive momentum, Cooke and Young elevated the piece by intertwining their two captivating sounds. The chill-provoking blend is destined to score a spot on romantic playlists nationwide, as it serves as a reminder to count your blessings and appreciate your special someone.

“‘Never Til Now’ is a song that has opened so many doors for me already and really changed my life. To be able to bring a superstar like Brett Young onto this song with me is such an honor,” Cooke gushed in a previous statement. “I’ve been a fan of Brett’s music since the start and I feel very honored that he believes in the song the way that I do.”

Cooke penned the radio-ready single with Matt Roy and critically acclaimed songsmith Jimmy Robbins. The harmony-driven melody proves that Cooke has a bright future ahead within the country music genre.

Karley Scott Collins, “Tattoos”: Sony Music Nashville newcomer Karley Scott Collins dropped a heart-wrenching ballad, “Tattoos,” and it might just be her strongest track yet. The heavy-hitting lyrics about brushing off sentimental memories paired with her country-rock vocals make “Tattoos” a stand-out single.

“‘Tattoos’ is about how memories of a person can feel like they’re engraved in permanent ink on your heart no matter how much time has passed or how much you want them erased,” the rising star said. “It’s about wanting to move on from something and not being able to, which is a feeling I think a lot of people have experienced,” she added.

The diary-like single penned by Collins, Brock Berryhill, and Brett James, follows her robust up-tempo track, “Heavenly.” To go along with the potential chart-topping hit, Collins released a reminiscent music video that effortlessly brings the internal battle she speaks of within the lyrics to life.

“I spent a good portion of last year searching high and low through my memories and dreams,” shares the songstress in a recent statement. “I did what any songwriter would do: I turned off all the outside voices and started turning what I found into something that I want to sing. This song was born from that place. As an artist, dreaming fuels my life – the risks I choose to take and the art that I create and share with the world.”

On the heels of her performance-ready track “Dreamin’s Free,” Smith will kick off her 14-city headlining The High & Low Tour tonight (April 1) and wrap in Charleston, SC, on May 14.