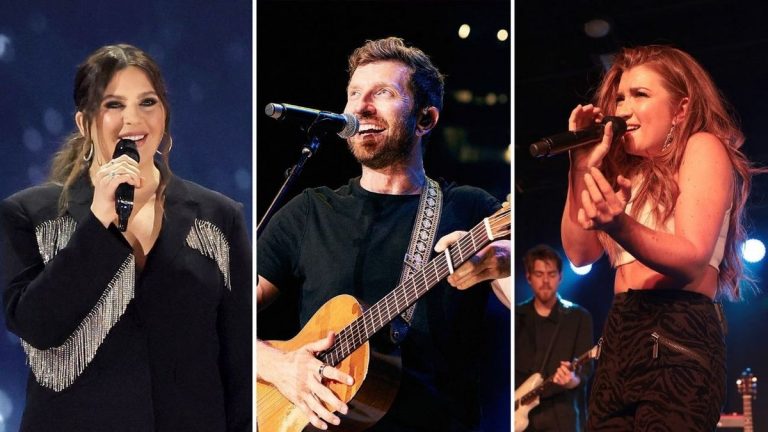 There’s long-awaited new music this week from some of the biggest names in country music including Jason Aldean, Luke Combs and Carrie Underwood in addition to Chris Janson, Brett Eldredge, Midland and more. Check out CMT’s Roundup playlist at the bottom for the soundtrack to your weekend.

Brett Eldredge, “Songs About You”: Written by Eldredge, Jessie Jo Dillion and Ben West, “Songs About You” is a jazzy mid-tempo about moving on from a relationship in a world surrounded by songs that are reminders of a lost love. Eldredge’s distinct vocals rise and glide over the lyrics that namecheck lines from classic rock songs, including Bruce Springsteen’s “Dancing In The Dark,” Bonnie Raitt’s “I Can’t Make You Love Me” and Van Morrison’s “Brown Eyed Girl.”

“There are songs that just transport you back in time to a moment with someone you love,” Eldredge said in a statement. “Even though you’ve not been with the person for a long time, these songs take hold of you. You might be having a fine day, then you walk into a store where the song is playing, and you’re transported into the past.”

“Songs About You” is the title track for Eldredge’s new album that will be released on June 17. Eldredge co-wrote 12 songs on the new album, including “Want That Back” and “Holy Water.”

“Jon knows his way around a rodeo and Bakersfield,” Midland singer Mark Wystrach says in a statement. “He’s our kind of country. His voice cuts through a track like this; you know it’s him and you wanna sing along.”

Lyrics include: With these heartbreak beers, they go down fast| But this getting over you is going down slow| It’s closing in on closing time| And I ain’t even close. I’ve got a long, longneck way to go.

“There aren’t many groups – or artists – who love the same real hard kind of country,” Pardi said in a statement. “But Midland can go lick for lick, longneck for longneck or Haggard for Haggard – so when they asked if I wanted to come sing this with them, I was all in. This is the kind of country that not only honors the past but remembers that California kind of country I was raised on.”

“Longneck Way to Go” is from Midland’s new album “THE LAST RESORT: GREETINGS FROM,” which will be out May 6.

Lyrics include: Hey, what a time to be alive| Stop, you don’t have to say you’re fine| Cause I hear all the voices in your mind.

The poignant lyrics are highlighted by minimal, solemn production, including a strings section and piano that builds as the song progresses with promises to “be there when you need it.”

“When You Need It” is from Townes’ new album “MASQUERADES” which is out today.

Travis Denning, “She’s On It“: Country music breakout star Travis Denning recently released “She’s On It,” a reflective breakup banger that was carefully tailored for his high-energy performances. Denning penned the arena-ready track alongside Jamie Paulin and Paul DiGiovanni back in 2016. Although the toe-tapper was tucked away in Denning’s back pocket for years, the rising star stamped it as his favorite single to date. The electrifying guitar riffs scattered throughout “She’s On It” and the relatable lyrics are destined to be on country music fans’ go-to joyride playlist.

“We recently played ’She’s On It’ at a live show, and the reaction felt instantaneous,” said Denning in a statement. “This track has been a favorite of mine and the team’s for a little while, and so we felt like now was the time to put it out there to a wider audience. Hopefully listeners dig it. I can’t wait to get out here and play it at more shows.”

This summer, Denning is set to bring the country radio-worthy anthem on the road with Dierks Bentley. The budding singer-songwriter will also be connecting with festival-goers at Stagecoach, CMA Fest, TidalWave Music Festival, and more.

Peytan Porter, “First Stone“: Country artist Peyton Porter may be new to the music scene, but her robust vocals and razor-sharp lyrics say otherwise. On the heels of her successful debut track “Therapy,” the songstress released “First Stone.” Porter’s latest single proves that she is wise beyond her years, as she encourages listeners to have more empathy for others while navigating the cut-throat climate we live in today. Porter’s soulful sound and classic country storytelling within “First Stone,” will send chills up any country fan’s spine.

“The day Billy [Montana]and I wrote this song, we had been talking about something we’d seen in the news, and we kept coming back to the lack of self-awareness and accountability we felt our culture, including us, had going on. I remember mentioning that I have no business bending down to pick up a stone to throw when I’ve messed up myself….and ’First Stone’ fell out of the conversation from there,” she recalled. “At first, I pictured it stripped and back-porchy sonically because it’s a bit of a heady topic with a simple melody, something I’ve always loved John Prine for. But when we got in the studio, the players breathed a new life into it that gave it two feet to stand on. This song is my ideal world wrapped up in a few minutes. I hope people listen and feel more connected for it.”

Anne Wilson And Hillary Scott, “Mamas”: Just in time for mother’s day, Christian-country singer Anne Wilson tapped Lady A’s Hillary Scott to collaborate on faith-centric melody, “Mamas.” Wilson reached mainstream success with her fast-rising single, “My Jesus” in 2021 and now she’s destined to dominate the charts with her tear-jerking track,“Mamas.” Throughout the moving duet, the two touch upon what makes a mother and daughter bond so special. The sweet single penned by Wilson, Matthew West, and Jeff Pardo lives on her recently released debut record, “My Jesus.” A rootsy-country collection that displays Wilson’s self-discovery while coping with a devastating loss.

“My debut record My Jesus is out NOW! I have spent the last two and a half years writing these songs and crafting each of them,” says Anne. “It’s been the joy of my heart to allow the Lord to work through this project and inspire these songs. I’m so excited for all The Lord will do through these songs! Beyond grateful.”

The soul-touching record proves that Wilson wears her heart on her sleeve and is truly a crossover artist in the making.

Listen to the full Roundup Playlist: