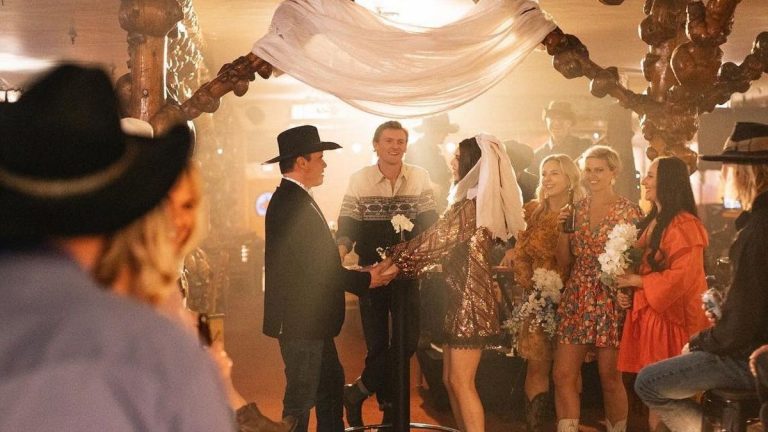 Country music artist Jenny Tolman always dreamed of a winter Wyoming wedding, and over the weekend (March 19), her snow globe-like vision came to life. The “World’s a Small Town” singer exclusively opened up about her winter wonderland day with People and shared that it was “absolutely perfect.”

The happy couple tied the knot in Jackson, Wyoming, at Split Creek Ranch – a picturesque venue that overlooks the Grand Teton mountain range. The 26-year-old told the publication that the weather held up, and the winter conditions made a flawless backdrop for photos.

“The sun was out, and there were no clouds covering the Tetons. The day before, it snowed in Jackson, so we had a beautiful fresh layer of snow. It was the most perfect weather you could ask for!” she shared with the outlet before detailing about her luxurious entrance. “I rode in on an emerald green Cadillac with longhorns on the front.”

Tolman continued to reveal that the beaming sun allowed her to turn down the convertible top. The hitmaker took advantage of the situation and draped her cathedral veil across the back.

“It was even warm enough outside to put the top down. I rode in sitting on top of the backseat with my veil and train draped over the entire back of the car,” she gushed.

The mermaid dress with delicate lace may look familiar to Tolman’s fans, as it was the style she selected on TLC’s hit television show, “Say Yes to the Dress.” The bride told People that she never imagined herself in the form-fitting ensemble, but she knew it was her dress from the moment she slipped it on.

“I absolutely loved the high neckline detail on this dress,” said Tolman. “This dress is never something I would’ve pictured going for, but I just felt so regal and special in it,” she added.

To polish the fairy-tale look – she purchased statement earrings from a world-renowned bridal shop, borrowed a white mink shawl from a family friend, and for “something old,” she clipped her grandmother’s earrings onto her bouquet for sentimental value.

When planning the special day, the artist revealed that it was important to keep the wedding traditional and timeless.

“I really like tradition when it comes to such meaningful events as this, so we have the classic bridal march and wedding march being played for the ceremony,” the brunette beauty declared. “I just think it makes the event feel so classy and elegant, and something about real strings playing those traditional pieces makes it feel like we are in a historical moment that much more.”

However, once the ceremony wrapped – the newlyweds sprinkled in modern elements and invited their guests to sip on “Toddies, Coffee, and Cocoa” with whiskey at a historic hotel. After enjoying delectable bites and beverages, party-goers were asked to make their way to the National Museum of Wildlife Art for the reception.

The rising star and her now husband, Dave Brainard choreographed their first dance to Amy Winehouse’s “(There Is) No Greater Love.”

Following the lively gathering, Tolman and her groom threw on their go-to cowboy hats, changed into something more comfortable, and held a fun-filled afterparty at the bar featured in her recent music video for,”Married in a Honky Tonk.”

“I changed into a white jumpsuit, and Dave and I put on our cowboy hats and took pictures in front of the bar with it all lit up,” she said while also mentioning that they will be jet-setting to Costa Rica for their honeymoon.

Just a day before the wedding, the breakout star dropped the music video for “Married in a Honky Tonk.”

“The first time I ever played ’Married in a Honky Tonk’ for a live audience was at the Million Dollar Cowboy Bar in Jackson, Wyo. The song mentions the Cowboy Bar in it, so I said from the stage that I had a dream to get to shoot the music video for this song there. Well, the crowd absolutely loved the song and went wild, and the next thing I knew, the community came together to make that dream a reality,” Tolman told the Tennessean upon release. “If you’re gonna get married in a Honky Tonk, the Cowboy Bar in Jackson is definitely the place to do it!”

Tolman’s 13-track sophomore album of the same name is out and available to stream.

Share. Facebook Twitter Pinterest LinkedIn Tumblr Email
Previous ArticleTim McGraw Reveals The Secret To An Emotional Song: “I Feel Like I’m Tearing Out A Piece Of My Soul”
Next Article Beyond the Edge: Paulina Porizkova says “Without Craig Morgan, None Of Us Would Be Alive”