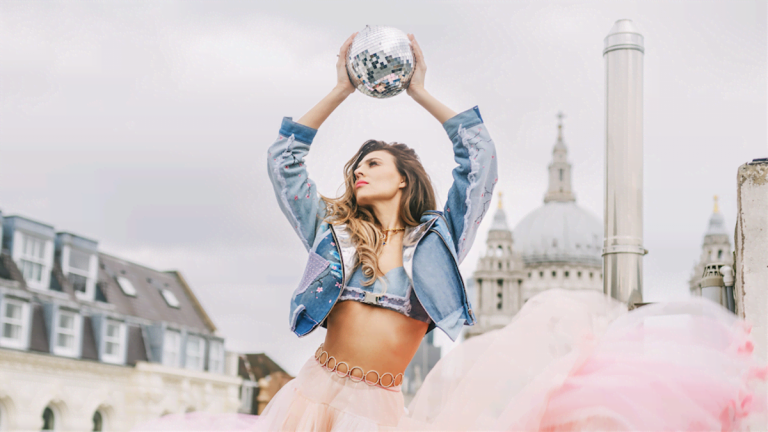 In England, there was a family constantly blasting Billy Joel, Bob Dylan, Gloria Estefan, The Rap Pack, and several more prominent musicians through the speakers during all hours of the day. Despite the genre, a young hopeful recognized one similarity that all of the artists had in common – the power of storytelling.

At just 9 years old, Twinnie was transfixed by the way songsmiths had the capability to spark a reaction by delivering a message or by partaking in wordplay. Yet, it wasn’t until she became familiar with female trailblazers, Shania Twain and Dolly Parton that she had the itch to explore the world of entertainment.

While Twinnie’s parents assisted in expanding her musical palette, the budding songstress expressed to CMT that she once did not have the professional guidance she needed to pursue a career in music. Therefore, she had to become a self-starter in order to pave her own path – which left her hungry for an invitation into the industry.

“I grew up very much in a multicultural background. So, I was always kind of split between two cultures, and neither of them knew anybody in music… I really had to figure it out for myself,” she exclusively shared.

With her eye on the prize, Twinnie scored her first job at 18 in a musical theater production with Brian May, the lead guitarist behind the rock band Queen. While putting in the work and performing at sticky dive bars on the side – she quickly found herself sharing a stage with A-listers such as Michael Bublé, Robin Thicke, and Pharrell Williams.

After experiencing European success – Twinnie took her artistry across the pound to Music City, where she was introduced to writers Phil Barton and Lindsay Rhymes. Their professional relationship blossomed into a friendship as they bonded over the concept of “inclusivity.” It wasn’t long until the three placed pen to paper to create the up-tempo anthem “Welcome To The Club,” a single that delivers a meaningful message around self-love, self-confidence, and most importantly, acceptance.

“I think it is special because we are all from different places. I am from England, and they are from Australia. They live here [Nashville], but we were all trying to write from a place where we wanted to feel like we belonged,” she said. “We wanted to feel like we were part of a community. We all had a unique perspective, I think because we were once the outsiders.”

Upon arrival to the 10-year town, Twinnie found her place within the entertainment space by being her authentic self and with her razor-sharp lyrics. While honing in on her craft with her storytelling soul, she realized that she never needed a formal invitation to chase her dream, but she had to accept her own individuality.

“’Welcome To The Club’ lyrically is all about wanting to kind of belong to a community that loves you and accepts you – that’s what Nashville is to me,” she confidently stated before breaking down her vision behind the captivating music video.

The state-of-the-art video highlights her musical journey, as it displays Twinnie strutting into a London club and exiting in Nashville. Throughout the colorful clip, party-goers are captured dancing and embracing themselves in their own skin.

“I wanted to inspire anybody that’s watching and thinking that they can’t do what I’m doing – especially girls from my community. I wanted to be like, ’You can come from a small town, and you can go to America and live your dream.’ Which honestly I feel like I am doing, I got such determination,” she said.

She continued to explain that the high-quality music video was not created on a pretty penny. It quickly turned into a family affair, and loyal friends from both sides of the ocean came through to turn her multifaceted idea into a reality.

“We did the video on hardly any money,” she said. “I am so grateful for every single person in that video. My grandparents were in it, and they are the couple dancing. Many of my artist friends from pop, country, folk, rock…you name it, all came down to be in that club. Emily West, Julia Cole, Walker Burroughs – I really wanted to highlight other musicians within my video. I just wanted people to feel encouraged to be authentically themselves and celebrate their individuality because that’s what people have done for me in this down. That’s what my record label has done for me. They celebrated the fact that I was different.”

While being the star of the music video, Twinnie declared that she had to throw her director and choreographer hat on as well. She mentioned that several aspects of the video were “off the cuff” since she was busy plotting the shots and following through with her plan of action.

“I had a very clear vision because of the lyrics, but I also wanted to represent all different types of people from all backgrounds,” she said. “We did this from the cast to hair and make-up to the crew. It was very diverse and really wanted that to come through in the music video. This community is for everyone. No one is the outsider.”

Having her hands in several different areas came naturally to the breakthrough artist, as she tends to picture her music videos while still at the writing table. She credits her musical theater background and early love for music for turning her into a well-rounded creative.

“I know what I want. I have a very clear vision for things,” she confirmed to CMT. “I think that honestly comes from being in the industry so young. I am such a visual writer, and I love concepts. So, I’m already 20 steps ahead…. I see the bigger picture, and then I kind of reverse engineer it. I think just everything that I’ve done in my artistry has really helped me be such a richer and fuller artist.”

While choreographing the music video, she had fans and her next steps on top of mind – proving that she’s a strategist at heart. Twinnie kept the dance moves simple, as she wanted her loyal community to learn each step and bring the routine to TikTok.

“I want them to join in on the ’Welcome To The Club’ dance challenge,” she stressed. “Nothing brings people together more than music and dance. I want people to dance with their local community. I went and taught the dance routine to people from my local community – my baker, my butcher, like some people were down and some people were not, but I think it’s encouraging people to kind of connect.”

As Twinnie continues to push inclusivity and her self-love initiative with her recent release “Welcome To The Club,” she will also be channeling her energy into creating more relatable music in the studio. She encourages her fans to stay connected on social media, as she hopes to hit the road in the near future.