Dierks Bentley Shares Story Behind “Beers On Me,” Celebrates 21st No. 1 Hit 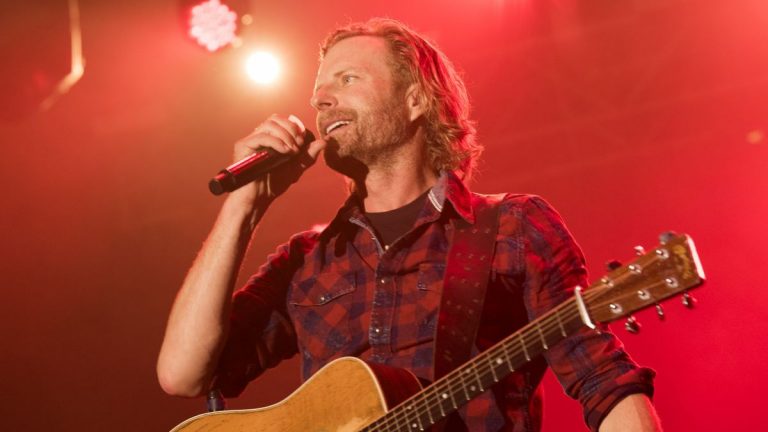 Dierks Bentley’s life is imitating art this week as his collaboration with HARDY and Breland, “Beers On Me,” became his 21st No. 1 hit. Now, he says, a round is on him.

“#BeersOnMe is #1 at country radio today… wow!” Bentley said on social media. “Thank you to everyone who helped make this happen, to @breland (which… congrats on your first #1 dude 🤯) and @hardy for making this song what it is. Country radio… I owe y’all a beer.”

HARDY replied: “THANK YOU SO MUCH DUDE”

Bentley co-wrote “Beers On Me” with Ashley Gorley, Luke Dick, Ross Copperman, Breland and Hardy from an idea that was sparked on a writers retreat in Colorado. Bentley, HARDY, Copperman and Dick planned to split into groups and write songs but instead opted to spend several days writing as one large unit.

“I just loved the idea of (“Beers On Me”) because that’s what I thought it’d be fun to do for my fans,” Bentley told The Boot. “You get a ticket to the show, and then you also get a free beer coupon. I was going to pay for that out of my pocket, and so I was like, ‘This is such a great song idea, let’s go with this,’ we wrote it and then I had Hardy come in and sing on it.”

After he was back in Nashville, Bentley read a story about Breland in an alternative newspaper and was intrigued. He sent Breland a text, and the singer arrived at the studio the next day. Bentley played him the song, including the third verse that he wanted him to sing, and Breland asked if he could rewrite it.

“We played the track over and over again and he just started pulling things out of the air, laughing to himself, messing with his hair and we’re like, ‘What is he doing?’ and writing stuff on his phone,” Bentley said. “It was just like watching a mad scientist, and 25 minutes later, he’s like, ‘Can I play you what I wrote?’ And he plays his verse. This isn’t a song that’s going be in the Hall of Fame, but what he wrote was so well written. I feel like the rest of us have been painting with six colors and he was using a paint set that had 120 different colors to draw from.”

HARDY also took to Instagram to celebrate the success of “Beers On Me.”

“Thank you @dierksbentley. Thank you @breland. Thank you to the writers and everyone else involved. And thank you country radio! Number 1 baby!” he wrote.

“Ill always remember you walking down the stairs at that house in Colorado with the idea… cool to see it go to full fruition. Thanks dude!” Bentley replied.

Breland is beside himself with excitement, marveling at the speed at which his career took off.

“MY FIRST NUMBER ONE!!! 🍻🍻🍻” he wrote. “Thank you so much to @dierksbentley and @hardy for believing in me and for all the radio stations and country music fans for blowing this one up. I moved to Nashville a little over a year and a half ago very much feeling like an outsider, but here we are with the #1 song at Country radio. Dreams do come true 🙏🏾 This time and this time only, the “Beers on Me” 🍺

Bentley chimed in: “Yeah DUDE!! So happy for you (and me haha). Thankful to know you and to be pals. I’ve enjoyed watching your career blow up. Keep rocking.”