Dolly Parton Is Set To Produce And Star In “Run, Rose, Run” The Movie 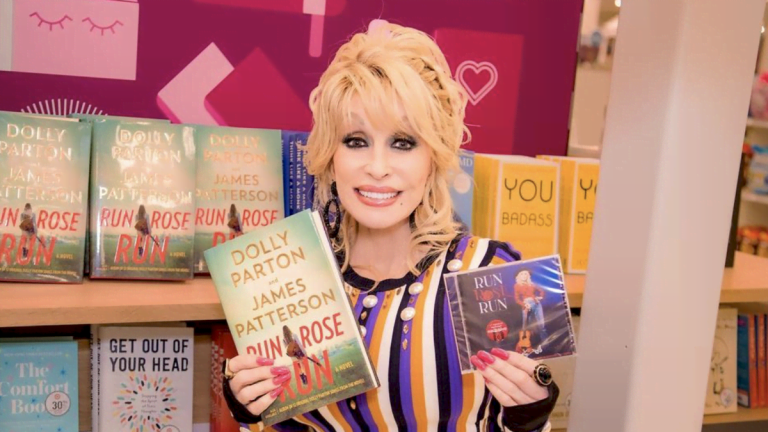 The country music icon Dolly Parton will be making her return to the big screen in a feature film adaptation of “Run, Rose, Run.” Earlier this month, the hitmaker released the music-inspired thriller, “Run, Rose, Run,” alongside award-winning novelist and co-writer James Patterson.

The page-turner is about a young female named AnnieLee with high hopes to become a star in the honky-tonk town. The aspiring musician is on the run from her past, but the darkness she fled from may sneak up to haunt and destroy her while she tirelessly tries to “claim her destiny” in Nashville. During AnnieLee’s time in Music City, she is approached by a retired country legend.

While the hardcover scored a spot at the top of The New York Times bestseller list, Parton told CBS News that she was eager to turn the action-packed novel into a movie.

“I’m hoping to get to play that character when we do a movie of the book, which we hope to do, at some point,” she shared with the outlet.

Just weeks after the successful release – the narrative has been officially picked up about Reese Witherspoon’s media company, Hello Sunshine. The “Big Dreams and Faded Jeans” singer will be starring in the production and will be producing alongside Patterson, Witherspoon, and Lauren Neustadter, the President of Film and Television of Hello Sunshine.

“I’m proud, excited, and honored to be working with my good friend Reese Witherspoon and Hello Sunshine on the movie of ‘Run, Rose, Run’ from the novel I co-wrote with James Patterson. James and I love Reese and look forward to working with her and her wonderful team,” Parton shared in a previous statement. “It has been a joy working with Dolly Parton on this book. It’s a great story that we are both proud of. And, in partnership with Reese Witherspoon and Hello Sunshine, we will produce a great movie,” Patterson added.

The award-winning actress and producer Reese Witherspoon mentioned that pursuing “Run, Rose, Run” as a film was a no-brainer, as Parton played a vital role in her upbringing.

“Growing up in Nashville, I’ve loved Dolly since the moment I heard her magical voice and saw her luminous personality shine onstage. Beyond her magnetic presence as an artist and performer, she is one of the greatest songwriters and storytellers of our time. Her impact knows no bounds — as a musician, actor, writer, businesswoman, activist, and all around incredible human being — Dolly Parton is not only an icon to me, but a true inspiration to women and girls everywhere,” Witherspoon recently said in a statement.

The bookworm continued to point out that her love and respect for the female vocalist grew while reading the chart-topping tale.

“My admiration for [Dolly] grew to even greater heights when reading ‘Run, Rose, Run,’ a gripping and heartbreaking book I couldn’t put down. I couldn’t feel more honored to be working alongside her and James to bring this remarkable story to the screen,” she concluded.

The cast list for the forthcoming film is not confirmed, including Dolly Parton’s role. Stepping onto a set will not be Parton’s first rodeo, as she has starred in popular movies “Joyful Noise,” “9 to 5,” “The Best Little Whorehouse in Texas,” and “Steel Magnolias.”

Hear @kelseaballerini and I read an excerpt from the audio book for Run, Rose, Run, co-authored by @JP_Books in Spaces!https://t.co/Otobj6oqWq

Until a premiere date is set in stone, country music fans can snag a copy of “Run, Rose, Run” via Amazon or any Indiebound book store. Parton and Patterson also included an audiobook featuring country music star Kelsea Ballerini.