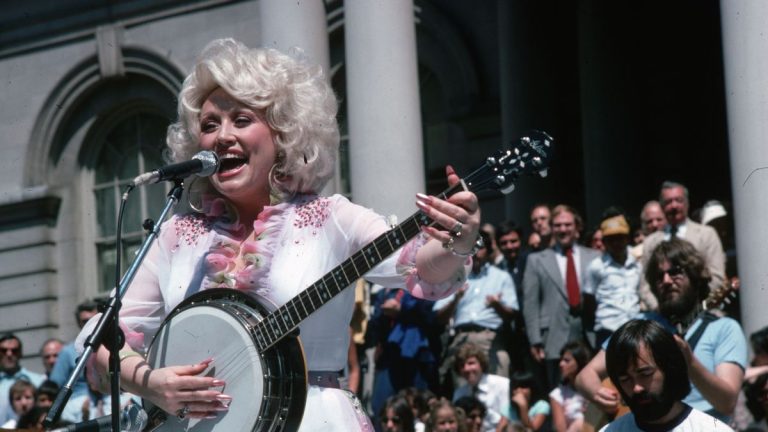 By 1981, the idea that country music was primed for a female mega-star was obvious. By 1982, Dolly Parton had shattered the glass ceiling of expectations for female artists in country music, and the genre has positively benefitted. Prior to 1981, performers Loretta Lynn and Tammy Wynette had achieved nearly three-dozen No. 1 Billboard country songs between 1963-1976, keying off the success that Patsy Cline was beginning to accomplish before her life was tragically cut short in 1963. Also, stars like Lynn Anderson and then young artists like Tanya Tucker were emergent and established themselves. However, Parton’s deft blend of eager ambition, some superstar friends, and a pop rocket of a country anthem allowed her to become country music’s — dare to say, all of pop music’s — biggest mainstream star.

“About four years ago, Dolly Parton was a country singer churning out one-nighters on the C & W circuit. Back then, Fifth Avenue was a movie fantasy to her, and [Swedish art sculptor Claes] Oldenburg was just a foreign word. In a few short years, she has turned her career around. Now she is hotly pursued by TV; she has a multimillion-dollar contract to play Las Vegas; and she commanded more than a million to be teamed with Burt Reynolds in her second movie, The Best Little Whorehouse in Texas, before her first one, Nine to Five, had even been released. If ever somebody figured out the American dream and made it work, it’s Dolly Parton.”

In 1978, Jane Fonda was attempting to cast a comedy she’d written about secretaries and their chauvinistic boss and went looking for a lead actress. Impressively, Parton — for reasons that likely had escaped much of the Nashville music machine regarding the ability of women to be lead superstars — leaped to the top of the creator’s list of choices. To Flippo in 1980, Fonda noted, “I had never met [Dolly] but I was really into her music. Anyone who can write ’Coat of Many Colors’ and sing it the way she does has got the stuff to do anything. This was not a woman who was a stereotype of a dumb blond. On the contrary, I felt that she could probably do just about anything she wanted, that this was a very smart woman.”

It’s intriguing to consider that for as much as one can love Loretta Lynn and Tammy Wynette’s solo catalogs alone, both of these superior female talents also have a significant chunk of their No. 1 charting material shared with male stars — specifically Conway Twitty and George Jones. As well, note that producers Owen Bradley and Billy Sherrill are frequently closely mentioned regarding greatly aiding the success of the female icons they worked with in the studio. Thus, the idea needs to be posited that for as much as Parton soared to the top, it’s an entirely arguable point that Parton’s “9 to 5” success could’ve possibly occurred, many times, at various points in a two-decade era.

Even deeper, note the arc of success of “9 to 5,” and then imagine it as applied to potentially other artists before Parton. Furthermore, contextualize it in the realm of what performers like Reba McEntire, or Shania Twain and Taylor Swift have achieved in the modern era.

Released in the first week of November in 1980, by Valentine’s Day 1981, “9 to 5” was simultaneously surging to the top of Billboard’s Hot Country Singles, Hot 100, and Adult Contemporary charts. That’s just scratching the surface of its success, though. The platinum-selling single was the title track of a film that earned ten times as much as it cost to make. The film then spawned a six-season television show and award-winning Broadway play, and the song itself was nominated for the Academy Award for Best Original Song. It’s entirely possible that due to the success of all things “9 to 5,” Parton will earn, at minimum, revenue equal to the median household income of the average American, yearly, for the rest of her life.

“9 to 5” essentially elevated expectations for women in country music. Though female superstars with immense crossover appeal existed in the genre beforehand, it’s when a star who wanted more for herself was seen by another star who had more to give that something astounding could occur. Of course, women elevating women is not rare. However, given that it involved superseding several iconic male artists and creatives, this case set up a multi-generational pipeline and precedent for women creating incredible, dynamic space for each other in country music. This legacy continues to this very day with initiatives like CMT’s Next Women of Country and Equal Play campaigns, plus artists like the Highwomen making space for innumerable female performers.

Ultimately, Parton’s legendary single shows that a cup of ambition — if blended with the proper elements — offers much more than a chance to simply come to life and make a living.