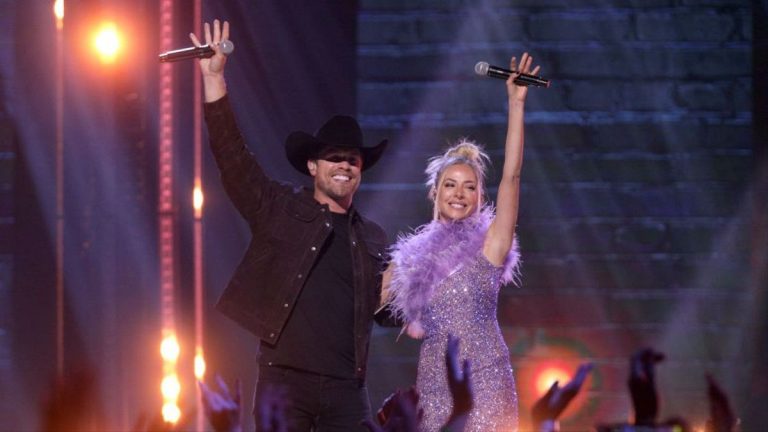 Dustin Lynch and MacKenzie Porter just made history with their six-week No. 1 song, “Thinking ‘Bout You.” The duet, which Lynch wrote with Andy Albert, Hunter Phelps and Will Weatherly, has been in the Top 10 on Billboard Country Airplay’s chart for 27 weeks – enough time to make it the longest-running Top 10 single since the Billboard Country Airplay chart launched in January 1990.

“My gut fought so hard for that thing,” Lynch told Sounds Like Nashville. “Now that we see this success of it, it’s like, ‘Okay, whenever you get a hold of a song like that, it’s worth the fight, and it’s worth being patient for, too.’ The timing of all that was just a blessing. I’m still embracing hearing it every time on the radio. I’m sure some people are tired of hearing it, but I’m sure not.”

Lynch wrote “Thinking ‘Bout You” on a writers’ retreat and then spent some time making adjustments before he thought it was perfect. When they added a female voice, he said he knew it was special.

Lauren Alaina originally sang “Thinking ‘Bout You” with Lynch, but when he couldn’t release her version as a single, he was forced to find a new duet partner.

Lynch and his team held blind auditions for a voice to replace Alaina’s but had little hope that someone could mimic her vocal range. Porter shocked them with her big notes and ability to sing octaves over Lynch in the chorus.

The opportunity to sing with Lynch on “Thinking ‘Bout You” altered Porter’s life.

“It’s been crazy,” Porter said at the CMT Music Awards, her first country music red carpet. “It changed my whole world. I’ve never been to this before. It’s all because of this one song. It feels very good.”

Porter says the duet weaves seamlessly into the solo project that she’s recording. She recently released her song “Pickup” and said fans could expect new music in May.

Lynch is just excited to collect another accolade for the duet’s growing roster of achievements.

“Wow! Adding this stat to ‘Thinking ‘Bout You’ is so huge,” he said in a statement. “It further validates what we all felt with this song, and it’s so rewarding to see it continue to connect with listeners.”