Elvie Shane Celebrates “My Boy”: “No one ever tells you what to do when you achieve your dreams” 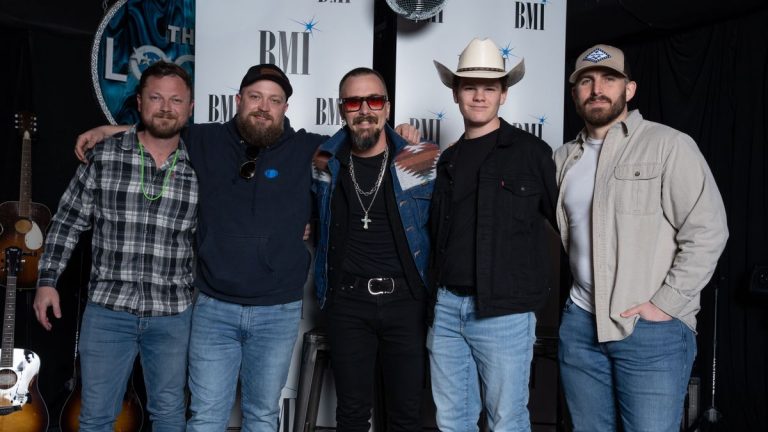 Elvie Shane, nominated for CMT “Breakthrough Video of the Year” at the CMT Music Awards on April 11, is celebrating one of the mountain top moments that earned him the nomination – his first No. 1 song.

Shane wrote “My Boy” with Russell Sutton, Nick Columbia and Lee Starr inspired by the relationship he shares with his stepson, Caleb. BMI hosted a party for the men, members of Shane’s team, and his family and friends at The Local in Nashville on Wednesday to commemorate the ballad that continues to capture the hearts of country music fans.

“If my career continues to be as great as it was last year, I still don’t think that we’ll ever have a year quite like that,” he previously told CMT. “Last year was just so many firsts. I got to play the Opry for the first time. We put out my record. I got to go on tour with Brooks & Dunn. It was just, it was insane. We had a baby girl. We bought the house. I just don’t know if I’ll ever be able to top last year.”

“My Boy” is from Shane’s debut album “BACKSLIDER” that is available now. The Kentucky-born singer said watching the song move up the charts was a nail-biter. When it finally looked like “My Boy” had a clear shot to No. 1, massive hit songs by Walker Hayes, Maren Morris and Ryan Hurd, and Jason Aldean with Carrie Underwood dropped, then raced up the charts in a manner that made him think he was never going to get there.

His frustration wasn’t over his personal potentially lost success – he just really wanted people to hear “My Boy.”

“I just wanted to see that song win because of what the song was about,” he said. “Of course, me being the artist was an added bonus. The topic of stepparents hasn’t really been touched on in a long time in our genre. When it did with, that was pretty awesome.”

However, Shane wasn’t prepared for what happened next – figuring out a new set of goals.

“No one ever tells you what to do when you achieve your dreams,” he said. “I’ve been on this road to Damascus, if you will, to try and find what’s next and a little bit of enlightenment for the next part of the journey.”

Shane’s new single “County Roads” is out now and is definitely on the map.

“My mom and dad really taught me what it’s like to love someone unconditionally,” Shane said. “I think that that’s a huge part of who I am, but (’My Boy’) may have painted a better picture of me than who I really am at my core. I’m definitely not the poster child for parenting. I just try to do my best. I think it’s important to allow people to be introduced to who I am as a person through my music. I think ’County Roads’ offers an opportunity to show a little bit of the mistakes made, the lessons learned and the rowdier side of things.”