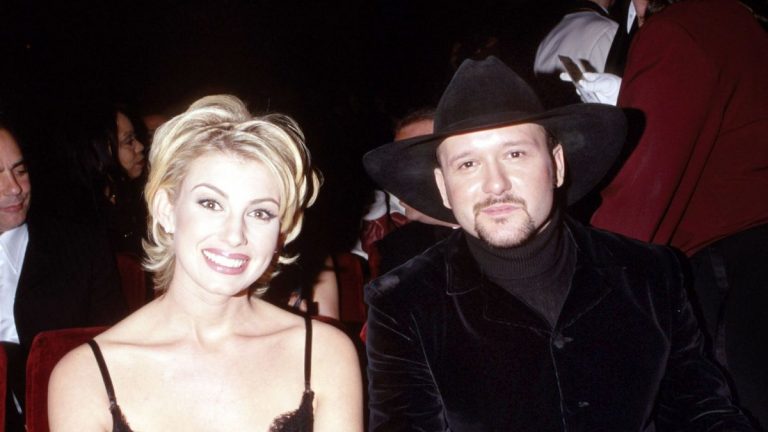 It has been 25 years since country music legend Tim McGraw released his 1997 smash hit, “It’s Your Love” featuring wife Faith Hill. To celebrate the anniversary, Hill took to social media Tuesday (April 19) to share a never-before-seen photo from the music video.

“I can’t believe it’s been 25 years since Tim released the single ’It’s Your Love.’ This was the very first duet we released, and it spent 6 weeks at #1 on the charts. While many more have followed, this one will always hold a special place in my heart,” Hill wrote in the caption.

The photo displays McGraw and Hill hand-in-hand filming the music video directed by Sherman Halsey in a castle-like ballroom. Hill sported an eye-catching gold gown within the moving clip that showcased her growing baby bump.

“I was pregnant with our first child, Gracie, and I was craving milkshakes,” she shared. “In this behind-the-scenes photo, I was most likely trying to hide the stain on my dress from the milkshake I devoured that day!! ItsYourLove,” Hill revealed.

In less than 24 hours, the tribute post garnered over 28K likes on Instagram alone. Fans praised the romantic duet and shared how the old-school lyrics once was the soundtrack to a memorable moment in their life.

“My husband and I danced to this song as our first dance at our wedding almost 21 years ago! Thank you both for such a beautiful song,” gushed a fan. “A masterpiece with an adorable backstory❤️,” another one pointed out.

Successful song finder Missy Gallimore brought “It’s Your Love,” penned by Stephony Smith to McGraw. The hitmaker told American Songwriter 10 years ago that the song was not pitched as a duet, but he immediately knew he wanted Hill on the track. The smash-hit now lives on McGraw’s 11-song record, “Everywhere.”

“Instantly, I wanted to do it with her. We were dating at the time, and we were in the middle of a tour together,” he revealed to the publication. “I remember I had a place out in Leiper’s Fork, and the bus was sitting there. Missy showed up with that song, and we went to the back of the bus to listen. I instantly knew I was going to cut it. I played it for Faith and told her I wanted her to sing on it. We both really felt like we had something,” he concluded.

The “Humble And Kind” singer and Hill first crossed paths in late 1994 at a country radio seminar for new musicians. At the time, McGraw was dating Kristine Donahue, and Hill was finalizing her divorce from music executive Daniel Hill.

It wasn’t long until the chart-topping artist asked Hill to marry him at a country music festival, and they tied the knot in 1996 in McGraw’s Louisiana hometown. While on tour and recording “It’s Your Love,” the two welcomed their first child. Today, the country couple has three daughters – Gracie (24), Maggie (23), and Audrey (20).

Since the release of the smash hit, the two joined forces on “Angry All The Time,” “Just to Hear You Say That You Love Me,” “Speak to a Girl,” “Meanwhile, Back at Mama’s,” “Like We Never Loved at All,” and more.

Most recently (March 6), the lovebirds delivered a chill-provoking rendition of their famous duet, “I Need You” at The American Rodeo in Arlington, Texas. While continuing to pursue music, they brought their love to the small screen to star in the hit television show, “1883.”

The hitmaker is gearing up to kick-start his 2022 tour with Russell Dickerson, Brandon Davis, and Alexandra Kay. Tickets are currently available for purchase, here.