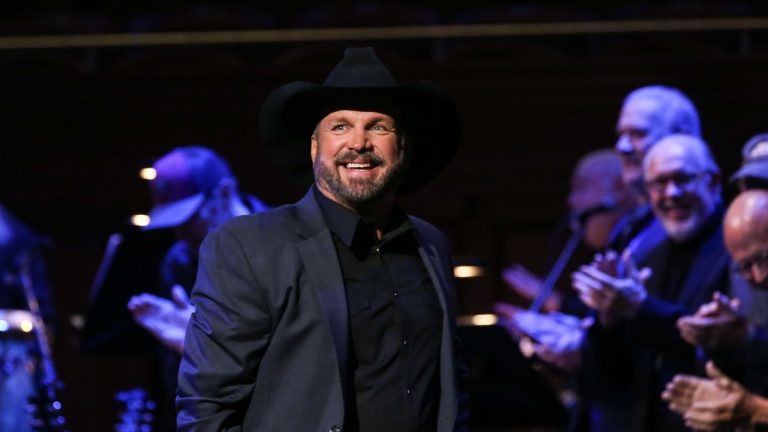 Garth Brooks – with some help from his acoustic guitar and wife Trisha Yearwood – entertained his Ryman Auditorium audience Saturday night for two-and-a-half hours. There was no band and no fancy set. Brooks, clad in jeans, a ball cap and work boots, spent the night singing songs – not necessarily his own – telling stories and making memories.

Here are the Top 5 things we learned.

1. All Garth Brooks ever wanted to be in college was George Strait.

“We can talk about The King George Strait all night long,” Brooks told fans before he sang “You Look So Good
in Love.”

Brooks said three of the “craziest years of my life” he was a bouncer at a large dance hall in Oklahoma.

“I’m not the size of a bouncer,” he admits. “The big guys took care of the trouble, and I danced with the women.”

Regardless of his physical stature, Brooks asked to be stationed next to Strait’s bus to provide security for the singer when he played the venue. Brooks was assigned to the opposite side of the parking lot.

“But they got me a tee-shirt,” he said. “I still have that tee shirt.”

Then Brooks sang “Amarillo By Morning” as the audience sang along.

Easily, one of the night’s brightest highlights was when Yearwood joined Brooks on stage for a few songs. They covered Conway Twitty and Loretta Lynn’s “After the Fire is Gone,” shared their version of Lady Gaga and Bradley Cooper’s “Shallow,” and delivered their duet “Whiskey to Wine.” But the couple’s vocal blend on “Golden Ring,” combined with the Ryman’s acoustics and hallowed history, felt otherworldly.

3. It was no secret before, but Garth Brooks has a long list of eclectic influences – and he knows all of their songs.

Saturday night was Brooks’ third night of a three-night Music City run, but he spent about as much time singing other peoples’ hits as he spent on his own.

4. Nashville songwriter Kent Blazy gave Garth Brooks a place to sleep when he needed one.

Kent Blazy, who co-wrote “If Tomorrow Never Comes” and “Ain’t Going Down (Til the Sun Comes Up),” was in the audience Saturday night, and Brooks pointed him out to the crowd. Blazy received a standing ovation as Brooks explained that Blazy was the first songwriter who treated him as an equal.

Brooks played “If Tomorrow Never Comes,” and the crowd sang for Blazy.

“This guy took me in and gave me a place to sleep when I needed a place to sleep,” Blazy said. “But the biggest thing he did for me was introduce me to this girl from Georgia. Ladies and Gentlemen, Trisha Yearwood.”

5. The Nashville shows were an experiment.

Brooks played one night at the Grand Ole Opry House and two nights at Ryman Auditorium last week, with each venue intentionally left partially empty. Brooks said his stadium tour ended in 2022, and the small shows were part of an experiment to help him gauge his next career steps. Brooks has spoken openly about his interest in having residencies in both Nashville and Las Vegas.
If his reaction to last week’s concerts is any indication, he’ll bring his show back to those stages again.