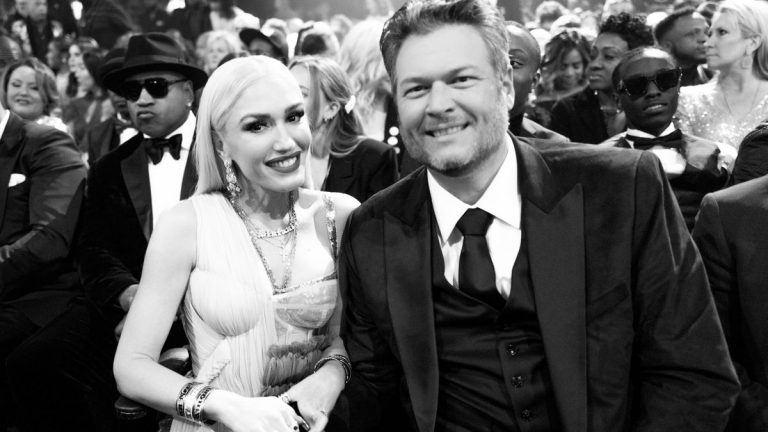 While the Grammy Award-winning artist spoke highly about her country star husband, Blake Shelton – Kimmel quickly pointed out that she was not wearing her wedding ring. Stefani quickly confirmed that she was still married and forgot to slip the eye-catching rock back on after she was done polishing it.

“I was like, ’Ok, I’m gonna put it in the jewelry cleaner, so Jimmy sees how sparkly, and amazing my ring is.’ And then boop! Hello, empty finger!” she displayed her hand. “I’m sorry, Blakey! I love my husband, and I love being married to him. It’s just the greatest thing that’s ever happened to me,” she added.

Since her intimate wedding in Tishomingo, Oklahoma, the “Hollaback Girl” singer has not been on Kimmel’s show. Therefore, the TV personality was hungry for exclusive details about the star-studded affair. Luckily the powerhouse vocalist did not hold back and was eager to share everything about the big day.

Kimmel was curious why the happy couple picked “The Voice” host Carson Daly to be their wedding officiant.

“Basically, we didn’t know who was gonna marry us — it was COVID,” the songstress told Kimmel. “We knew we wanted it to be intimate … and I just had the idea of Carson because he’s the one person that we both know so well, and we’ve known through the years.”

The multi-platinum artist continued to share that their decision was perfect, as Carson was initially going to be “a priest” before dabbling in the world of entertainment. Stefani also noted that she had a close-knit relationship with Carson since he was on MTV’s “TRL.”

“Every kid who was an altar boy thought of maybe being a priest,” Kimmel fired back with a laugh. “He just couldn’t get any girls interested,” he added.

The singer-songwriter chimed in to highlight that they were seeking someone in their “spiritual circle” to be the officiant.

“He’s such a good dad, a family guy. … I just wanted it to be serious, and I wanted [the officiant] to be someone who is in our spiritual circle, that was gonna be there.”

Although the couple had a close relationship, Stefani declared that they were still nervous to ask him to take on the role.

“I was nervous to ask him… it’s a really big thing to ask someone. We called him, and immediately he was just like, ’Let’s go!’ He was just so into it,” she explained. “It was a big relief, he took it super seriously.”

The hitmaker described her wedding day as “beautiful, perfect, and amazing,” before revealing that she did not want to write her own vows. The singer shared that she tried to convince Shelton two weeks before the wedding to go down the traditional route.

“He was like, ’I already did mine,” she recalled. “I’m like, ’There’s no way that you sat down and wrote that already.’”

Before their summertime wedding in 2021, the country songwriter penned an emotion-driven balled called “We Can Reach The Stars” alongside Craig Wiseman. The moving melody that now lives on the deluxe edition of Body Language, initially served as Shelton’s vows to his lovely wife.