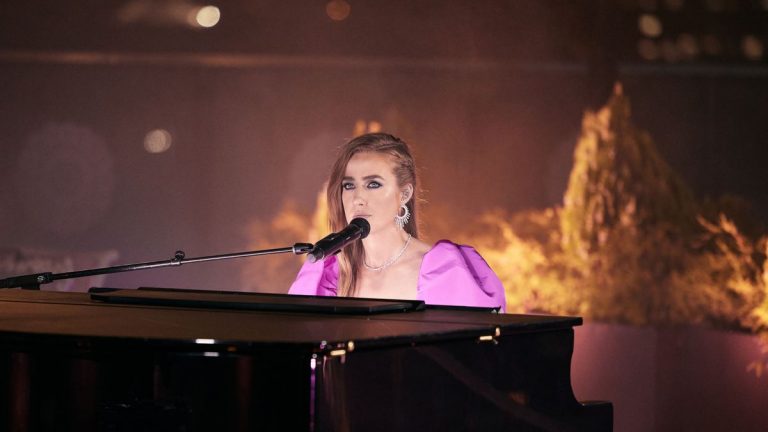 Ingrid Andress calls herself a “nerd” for wordplay, so just the title “Wishful Drinking” was enough to get her excited.

When Sam Hunt agreed to sing on it with her, she described the feeling as “confetti.”

Andress wrote the song with JP Saxe, Jonny Price, Lucky Daye, and Rykeyz. She dreamed up the title, “Wishful Drinking,” years ago, but when she penned the lyrics to go with it, she hated them. Many years and much more songwriting experience later, Andress dusted off the idea to share with the group of her favorite Los Angeles-based songwriters.

“It was a really fun song because I love wordplay,” she said. “I was like this is actually kind of a bop – another sad bop, classic Ingrid. That’s what I love about country music, getting to play with words like that.”

Stylistically, Andress described “Wishful Drinking” as “very rhythmic” and said that Hunt’s voice was the only one she could picture on the melancholy tune.

“I feel like Sam uses (a lot of those elements) in his music,” she said. “I appreciate how he stays true to that in all of his music. He just has this natural swag dripping from him. There’s not a lot of work to be done there.”

Initially, Andress didn’t think he would sing it with her. She knows he’s busy and doesn’t do a lot of collaborations.

“I didn’t think he knew me or cared,” she said. “I was like, ’He probably doesn’t even know who I am. It’s fine.’ It turns out he was actually a fan and pumped about the song. That was pretty mind-blowing to me.”

When Andress heard Hunt’s voice on the song, she admitted she was a little jealous.

“I was like, ’You sound better than me on this, and it makes me upset,’” she laughed.

Andress is back in the studio working on new music, but don’t expect to hear “Wishful Drinking” on her next album. She said the song is part of its own era and isn’t indicative of the new music she’s making.

“I want this song to be celebrated in its entirety as my first feature with another artist, and I want it to be special,” Andress said. “I don’t need it to tie into this album, which I know is not normal but here we are breaking rules every day. I don’t want people to be confused and think I will be living in the ’70s forever.”

As for her new music, Andress couldn’t be more excited.

“It is dope, and I am pumped,” she said, explaining she’s co-producing the project. “Thank goodness I like my own music; otherwise, where would we be?”