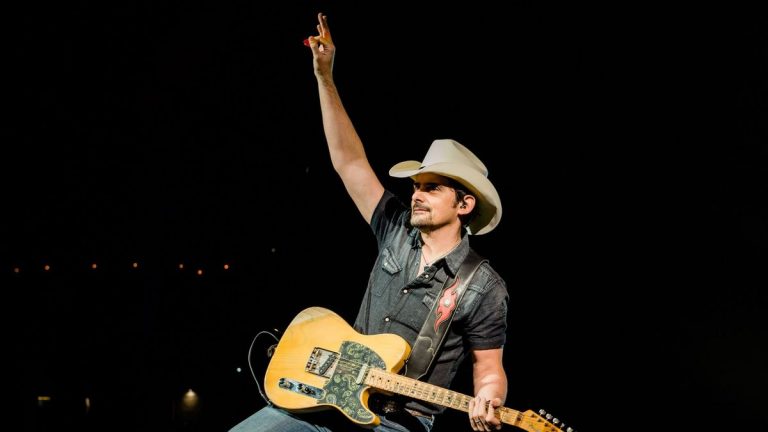 Brad Paisley has been a prank master since he was 5 years old.

It was New Year’s Eve, and he convinced his beloved grandfather to let him stay up to watch the ball drop by making the old man believe Paisley’s mother was an alcoholic.

Paisley and his grandfather were waiting by the door with their arms crossed when his parents got home. The singer, imitating his mother’s irritated voice, remembers she said: “Why are you up?”

“Tell her!” his grandfather commanded.

“Mom, it’s because of you,” Paisley told her.

“I didn’t raise you like this,” his grandfather angrily told Paisley’s mother.

The next thing he knew, Paisley said, his mother was begging him to tell his grandfather she wasn’t an alcoholic.

He responded with, “I wish I could, Mom.”

“I got in so much trouble,” Paisley remembers. “But I learned a lesson that day – stick with the joke as long as you possibly can.”

5. That time he swapped the footage on The Band Perry’s video screens for scenes from the Canadian kids show “The Doodlebops.”

4. Paisley and Blake Shelton logged thousands of miles on tour together over the years. Paisley once hired a large man to dress in a skimpy honeybee costume complete with antennas and a stinger to flit across the stage while Shelton was singing his multi-week No. 1 hit “Honeybee.”

3. Cam and Eric Paslay beat Paisley at his own game while they were on the road together. Cam joined Paisley each night to sing “Whiskey Lullaby” during his set. But the final night of the tour, Paslay dressed up like Cam – complete with a blond, curly wig, and walked out on cue while Cam sang out of sight.
“Tulsa was the last night with @camcountry on our winter tour, but she made sure to leave us laughing,” Paisley wrote on Instagram after the prank. “Plus, we got to see what @ericpaslay looks like in a wig!”

2. The jumbo pirouetting honeybee is far from the worst prank Paisley pulled on Shelton. Paisley once put raw chicken in the air fresheners on Shelton’s tour bus. It didn’t stink right away, but Paisley said within a few days it smelled like someone had died.
“You couldn’t get on the bus without throwing up,” Shelton said at the time.

1. Paisley has pulled a plethora of pranks on Darius Rucker over the years. His team slathered Rucker’s microphone with stinky cheese one night and put globs of Limburger all over his backup mic, too. As if that wasn’t enough, when Rucker launched into “Hold My Hand,” two of Paisley’s crew members came out and grabbed his hands and held them still. Then, two more people came out and caked Rucker’s hands with cheese.

“I just took it and went with it after that,” Rucker said.

The sweet video encapsulates every reason Paisley deserves the happiest of 49th birthdays.