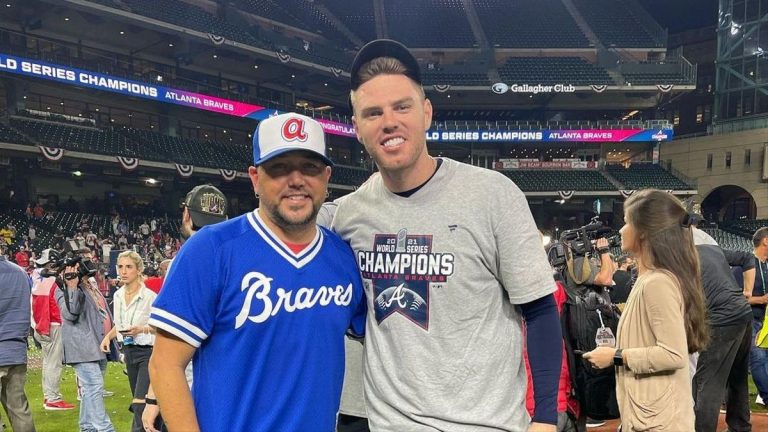 While preparing for the release of Macon, the first half of his forthcoming double-album, Jason Aldean couldn’t resist a trip to Houston for a special occasion — the Atlanta Braves’ recent World Series-clinching 7-0 victory over the Houston Astros.

“My boys are World Champs! Glad to be there and be part of the celebration. @braves #worldserieschamps @lukebryan @dallasdavidson_ you should be here,” noted the “Dirt Road Anthem” vocalist via Instagram.

Aldean, a life-long Braves fan, posed for photos on the field with several team members, including Freddie Freeman, Dansby Swanson, and Joc Pederson. Aldean was also seen — as recorded by his wife, Brittany — walking through the stadium with his arms up in the air, celebrating the Braves’ victory.

Regarding his favorite team’s unexpected climb to baseball’s pinnacle, he told CMT’s Cody Alan, “I honestly didn’t think it was going to work out very well for us. Then, all of a sudden, after the all-star break, they started putting some guys in place, and it was just a shot in the arm for the team. They weren’t expected to beat the Brewers. They knocked them out. Nobody picked them to beat the Dodgers, and they beat them out. Now we are in the World Series for the first time in 22 years. It feels like they are never out of the game, man. So, it’s fun to watch.”

As for “Macon,” it’s “Georgia” — the second half of the double-album — that is notably due as the Braves begin the defense of their World Series championship on April 22, 2022.

It’s expected that the release will feature 10 new songs and five live cuts from the country singer’s first five albums.