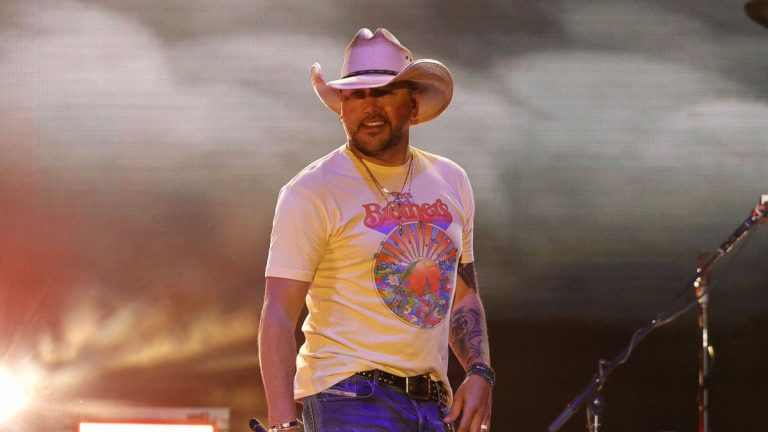 When it comes to songwriting, Jason Aldean turned to the King of Country Music for guidance – George Strait.

It’s not that Aldean can’t write songs. He moved to Nashville to be a songwriter for Warner Chappell. He said he knocked out “tons” of songs but has the same problem now that he did then.

Aldean, who will release “GEORGIA,” the second half of his “MACON, GEORGIA” double album on Friday, has no trouble finding songs to record, and his famous friends are happy to jump in and help. Florida Georgia Line’s Tyler Hubbard contributed to the album, as did ERNEST.

Hubbard sent Aldean the song “Your Mama” after the “Cruise” singer and his wife Hayley Hubbard had a surprise with their first pregnancy.

The song worked for Aldean, whose son Memphis is 4 years old. The Hubbards have since had two little boys, too.

New artist ERNEST also got in on the song-pitching action. The “Flower Shops” singer was hanging out on the beach with Aldean and Florida Georgia Line’s Brian Kelley when he played “Holy Water” for Aldean.

“I just lyrically thought it was so cool,” Aldean said. “We were just at the beach at that time, and it just kind of all made sense. I thought it was so well written and lyrically, I mean, just amazing. It kind of blew me away. And so that night, I’m like, ’Who do I call to put the song on hold?’ And so I ended up putting it on hold that night… I’m like, ’Man, hey, text whoever you got to text at your publishing company.’ And so I sent it to (my producer Michael) Knox that night. I’m like, ’Check this out.’ But the funny thing was, it was the first night I’d ever met Ernest.”