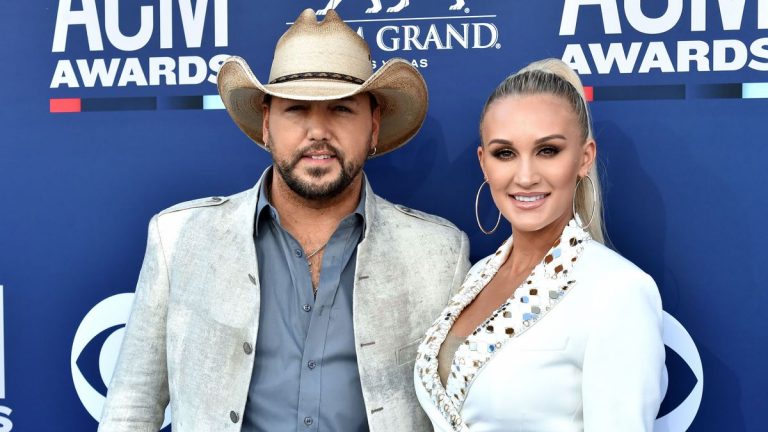 It seems like there is never a dull moment in the Aldean household!

This week, the country music icon took to Instagram to share a hysterical video of his wife’s latest wine-induced online purchase.

“This is what happens when your wife has a couple bottles of wine and wants to jump on Amazon,” Jason Aldean said. “And order some things that are just not even… I don’t even understand,” he questioned while showcasing Brittany’s strange buy on his kitchen table.

“You put some food in it, and apparently they eat it. I ain’t ever seen anything like it,” the hitmaker told his followers while demonstrating how to build the yard toy.

“My wife has lost her mind!” the singer wrote with a squirrel and rolling eye emoji in the short clip.

Shortly after the multi-platinum artist uploaded the video, his wife ran to the comment section to justify her actions and to laugh along with his devoted fan base.

“A couple of bottles LMAOOO😅,” she said. The honest reply raked in over a thousand likes and received praise from fans. “@Brittanyadean, he makes fun of you now, but when we see a squirrel picnic in one of his music videos, he’ll be thanking you! Drunk Amazon shopping is the best! Especially if you’re surprised to see what shows up,” a fan noted.

After poking fun at his loving wife, the “My Weakness” singer captured a precious moment between his daughter Navy Rome (3) and son Memphis (4) rocking out to his chart-topping hit, “If I Didn’t Love You” featuring Carrie Underwood.

The two dressed in comfy pajamas held a show-stopping performance of the fan-favorite anthem that lives on their father’s 12-piece project, “MACON.” Navy Rome is seen playing the rainbow-colored Xylophone, as her brother strummed his firetruck red electric guitar and belted the lyrics to the heartbreak anthem.

“Uh oh 😕. Looks like they got the bug. Next country duo comin ur way in about 20 years,” Aldean gushed in the video.

“If I Didn’t Love You” is currently nominated for a 2022 CMT Award for Video of The Year. Voting is now available for country music fans at CMT.com. The star-studded affair will air live on Monday, April 11 at 8 pm ET/ delayed PT on CBS and Paramount+. Following the award show, Aldean is set to release the second volume of his double album. “Georgia” will drop on April 22.