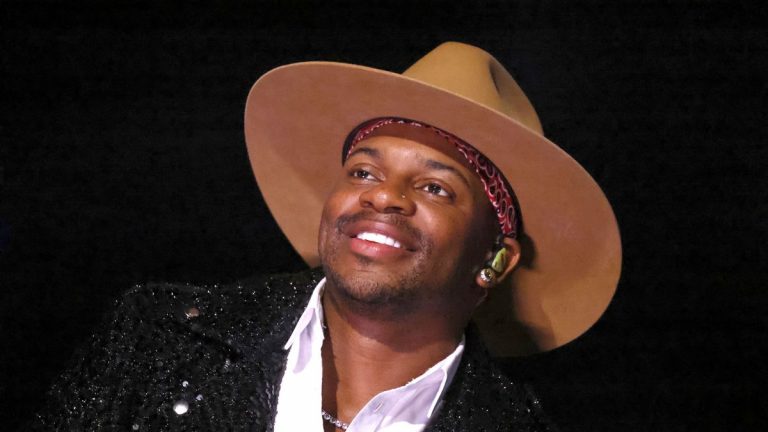 Country music star Jimmie Allen uses his songwriting gift to spark a necessary conversation around mental health. The “Freedom Was A Highway” singer took to social media Tuesday evening (April 19) to tease an untitled track about his battle with bipolar disorder.

Within the four-minute black and white video, the multi-platinum artist walks fans through his internal emotions and how they have been affecting his mental health. While simply strumming an acoustic guitar, Allen flawlessly delivers the raw lyrics that exemplify his strength and authenticity as an artist.

“’Untitled Song’ wrote this song about how I feel a lot of the time. Mental illness is something I have struggled with my entire life. Everyday is a constant battle with myself. To everyone struggling, remember you’re not alone, and it’s okay to say you’re not ok,” he wrote alongside the clip.

Throughout the heart-wrenching melody, Allen explains his constant challenges and how he often has to put on a persona to hide his true feelings. The heavy verses prove that fame and fortune do not equal happiness.

“The pain pulls me apart like a ripped-up floor | But I’ll keeping dancing and singing | That’s what the people came for,” The hitmaker sings. “So I’ll smile for the cameras and say that I’m okay | I’m broken in pieces and no one can see it |The truth is I’m always on the edge | Trying to find the point of living | I’m barely hanging on, and no one can see that | I’m constantly fighting me.”

Despite the harsh stigma around mental health in today’s climate, Allen provided fans with a safe space to talk openly about their obstacles. Many ran to the comment section to share their story and to thank Allen for opening up.

“I just started doing therapy for my anxiety and panic attacks. Thank you for putting this out and making it okay ❤️❤️,” said a follower. “Thank you for your vulnerability. These are the songs that people hold onto to feel seen and understood. Keep being who you are and inspiring others. You are worthy. You are enough. You are loved. Just as you are,” added another.

The Grammy-nominated artist has not confirmed a release date or any other information regarding the track. Allen first opened up about his diagnosis of bipolar disorder in 2019 and revealed that it was a fight he had faced since he was a child.

“I was diagnosed with bipolar disorder when I was 13,” the chart-topping artist told Big 95.5 Chicago radio. “What kept me going was knowing that so many other musicians like Charley Pride and others have bipolar disorder and how they were able to function,” he said while pointing out that he shares inspiring messages on Twitter for himself to persevere forward.

We are responsible for our own happiness.

Allen is not the only country music star who has shared his battle with mental health, as Naomi Judd opened up about her severe depression, Brett Eldredge spoke out about anxiety, Maren Morris revealed her struggle with postpartum depression, and Luke Combs’ has declared his life-long fight with obsessional obsessive-compulsive disorder.

Allen recently released his tear-jerking single, “Down Home.” A tribute track about his father, who passed away in 2019. The singer-songwriter is currently wrapping up his Down Home Tour with Neon Union. The 19-date trek will end in Richmond, Virginia on May 12.