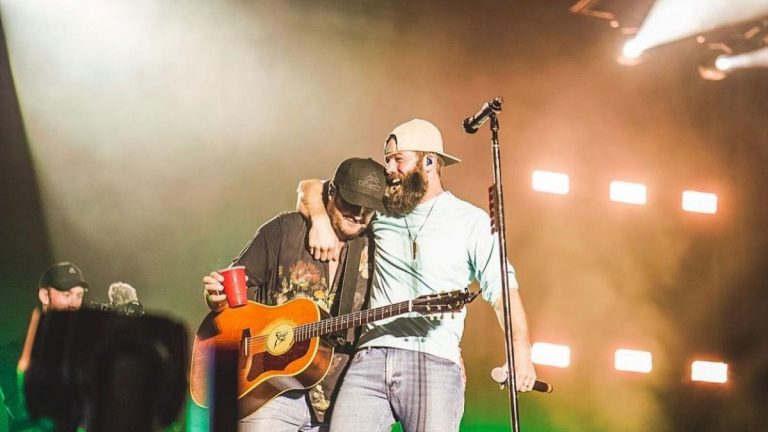 Jordan Davis and Luke Bryan recently (Jan. 31) slipped on their camouflage apparel to blend in on a laid-back duck hunt, yet the platinum plaque they received on the excursion for their No.1 single “Buy Dirt” made the country music friends stand out.

Davis and Bryan celebrated the rapid success of “Buy Dirt” on the water, after the RIAA certified the love-centric hit platinum early in January.

Within the music industry, the terms “gold” and “platinum” are thrown around quite often – but, to receive the prestigious recognition tends to be a challenging task. “Going gold” means that an artist has sold over 500,000 copies of an album or single. However, one must sell 1 million copies to get the platinum badge.

Davis did not take long to reach platinum, as “Buy Dirt” was certified gold just in October. While kicking back to bask in the milestone, Bryan took to Instagram to document the moment.

“’Buy Dirt’ number one duck hunt,” shared the singer while laughing on the flat-bottom boat. The video of Bryan slurring his words and having a good time captured his mother’s attention. “I stopped worrying about his crazy self-long ago. Have a blast, you nuts,” she said in the comments.

The track marks Davis’ first multi-week No.1 at country radio, as the smash-hit continued to grace the top spot of the Billboard and Mediabase country airplay charts for a second consecutive week.

“Buy Dirt” removed the viral single “Fancy Like” by Walker Hayes after a 24-week run at No. 1 on the Billboard Hot Country Songs chart as well. According to a recent press release, the collaboration with the “Waves” singer serves as Davis’ “fastest-moving single to date and the No.3 most consumed country song of 2022.”

While the two topped the charts in the United States, the mid-tempo also ranked on three other viral charts, including Canada, Australia, and South Africa. “Buy Dirt” has been inside the Top 200 country streaming chart and in the Top 5 for 16 weeks.

Although “Buy Dirt” has opened the door for many career-firsts, the chart-topping track has become the Louisiana native’s fourth career No.1. Davis penned the sentimental ballad alongside his brother Jacob Davis, Josh Jenkins, and Matt Jenkins.

Pumped to add a second show at @theryman on 9/28…join the Parish for special access to tickets starting on Wednesday. https://t.co/LmIeuINRek pic.twitter.com/GDNPKN5Gdj

On the heels of “Buy Dirt” going platinum, Jordan Davis announced that he would be taking center stage at the legendary Ryman Auditorium on September 27 and 28, 2022. However, fans can see him live and in-person in the Spring for the second leg of his Buy Dirt Tour with breakout stars Tenille Arts and Hailey Whitters.