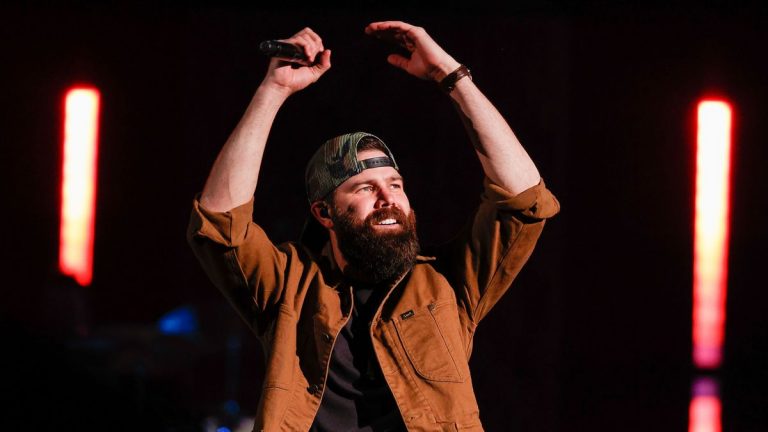 The fourth quarter of 2021 has been hectic for emerging country superstar Jordan Davis, but his ever-filling schedule also highlights bright personal and professional horizons. Not only did his wife, Kristen, give birth to his second son, Locklan Joseph, but he’s also opening for Kane Brown on his 35-date Blessed and Free Tour. Plus, he’s nominated for a CMA Award for Musical Event of the Year for his Luke Bryan collaboration “Buy Dirt.” So between achieving success in Nashville, keeping an eye on a newborn, plus maintaining a hectic schedule on the road, Davis could be the busiest artist in country music these days.

Locklan Joseph’s labor was scheduled to be induced on Sept. 7, two days before Davis started his run of dates with Brown. However, that date was changed — via email — to the 4th. “It was like 9:30 at night and my wife had gone to bed, but then she checked her email, and they were like, ’OK, you need to be at the hospital at 4:30 a.m., it was go-time,” Davis tells PEOPLE. Positively, Davis notes, “My wife crushed it. No major hiccups and we had a healthy baby and a healthy mama and all is well.”

As for Davis finding time to relax amidst his schedule, one look at his Instagram shows him smiling and upbeat during a weekend workout with Penn State’s women’s basketball team during an off day on the road.

As well, regarding this week and “Buy Dirt’s” chances for victory at the CMA Awards, Luke Bryan is hopeful, but also adds a note that points at something in line with Davis joining the ranks of top Music City performers in general, by stating to The Tennessean, “I think all the artists for the most part root for one another and pull for one another, and it comes across. I think the fans can see it too.”