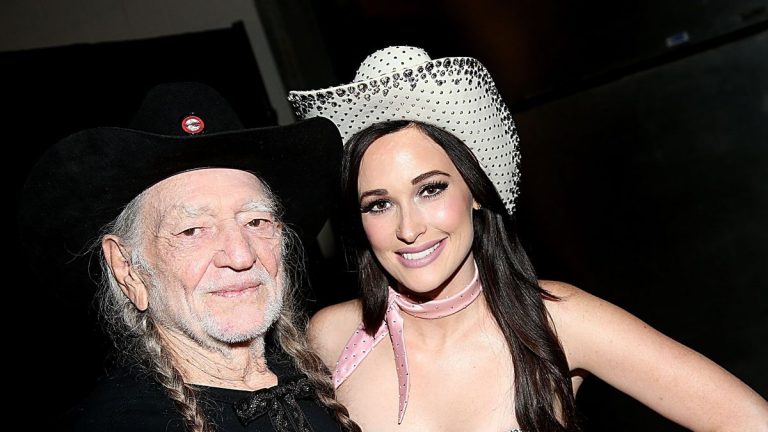 In honor of Willie Nelson’s birthday just around the corner, Kacey Musgraves recently caught up with “One By Willie” podcast host John Spong. To kick off season three, the six-time Grammy winner revealed what it was like to work with the country legend and how their tight-knit relationship became a family affair.

Long before Musgraves and Nelson became friends, she was like every other country music junkie on the search for the next big song. While exploring the deep dark web, Musgraves came across Nelson’s demo for “Are You Sure.” Musgraves told Spong that she immediately fell in love with the track.

“I get into these wormholes. I’m a night owl, and I just get on YouTube, and then I just find myself like in the weirdest corners of the internet. I’m like, okay. And just when I think that I’ve hit the furthest dark corner of the internet, I’m proved wrong, and I’m like, “Holy shit, this is – wow, I’ve really done it this time.” But one of these nights, I was kind of, you know, cruising around, and I stumbled upon this Willie Nelson demo from 1963,” Musgraves explained. “I just was like, “Whoa, what is this?” And then, you know, got really obsessed with it. Shortly after that, we got to go on tour with him. It was a co-headlining tour where it was Willie and Alison Krauss. It was unbelievable every night. It was unreal,” she added.

‘One By Willie’ season three is here! In the premiere episode, @KaceyMusgraves discusses the “real-ass country song,” “Are You Sure,” her friendship with Willie, the lucky joint he gave her, and so much more. Happy listening and happy 4/20, y’all! https://t.co/tlQKOZfGat pic.twitter.com/VaRliGHfI7

Musgraves continued to mention how she somehow built up the courage to ask about the demo that once caught her eye. Following a performance out on the road – the two were smoking together on his tour bus, when she sparked the conversation.

“I was sitting right across from Willie at his little bus table or whatever, and I said, ’Hey, do you ever sing that song anymore, ’Are You Sure’?’ And the look on his face was so surprised. He could not believe that I asked that question. And he goes, ’Are You Sure/ This Is Where You Want To Be’?’ I was like, ’Yeah, that song! Oh my God,’ she recalled. “He just pulls a guitar out, and he just strums, and he goes, ’Well, would you want to sing it with me?’”

After they wrapped up their jam session, the “Rainbow” singer said that Nelson immediately offered her the track, but under one condition…he wanted to make it into a duet.

It wasn’t long until the two recorded “Are You Sure” for her second studio album, “Pageant Material.” The multi-platinum artist declared that it was the last song she worked on and took a unique approach when laying down the vocals.

“We turned all the lights off in the studio and really kind of just got into this trippy mindset and put down a version of that song,” she said. “And then I got it to Willie, and he sang on it or whatever. His solo on that song kills me, still. I mean, it’s so out there. It was when we got his recordings back, we were like, ’Holy Sh*t,’ and loved it.”

The hitmaker explained that it was an honor having him on the award-winning collection, because he “embodies American music” and has the power to unite people from different walks of life.

“I don’t think there’s another artist, really, that embodies American music like he does,” she stressed. “Ray Charles, Dolly Parton. I mean, there are some. Johnny Cash is one. There’s something about him that’s different. I mean, he brings a lot of different people together. One thing about seeing his shows is that every race, every gender – like, if you’re a fan of Snoop Dogg, chances are you’re probably a fan of Willie.”

The powerhouse vocalist even pointed out that her grandparents are big fans of the Texas icon. Musgraves shared that her family ran into Nelson and his wife, Annie D’Angelo, in Hawaii over the holidays and a few years back. That Christmas, she gifted her grandfather $300 to buy into Nelson’s poker game with celebrity Paul Simon.

“He was so confused. But he had the biggest smile on his face. We went, he played poker, and he put his money down. I was so nervous,” she clarified. “He loses all of his money, and then he eventually wins it all back, and then he stood up and said, ’Well, I got to go.’ And he ended on a high note. He lost to Willie, and then beat Willie’s ass, and then we left,” she laughed.

The “Whiskey River” hitmaker still remains close to the young songstress, as they are set to share the same stage together this summer at the 2022 Palomino Festival.