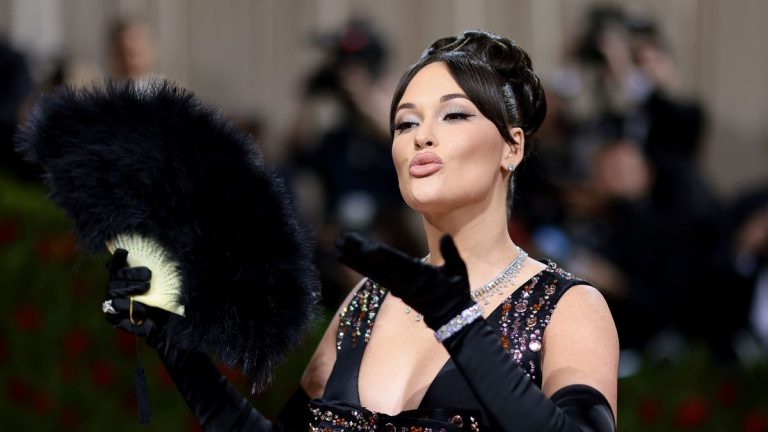 A-listers are expected to adhere to the dress code to pay tribute to the second installment of the Costume Institute’s “American: A Lexicon of Fashion” exhibit. The head-turning fashion at the white-tie affair exemplifies the evolution of America between 1870 to 1890.

During the Gilded Age, the creation of steam-powered looms pushed fashion forward – making the manufacturing of materials quicker to produce. In a blink of an eye, the fashion scene significantly changed. Women began to wear various fabrics and statement pieces, including ruffles, bows, delicate lace, and even fringe.

.@KaceyMusgraves is channeling her #MetGala date for the evening Priscilla Presley in custom @Prada pic.twitter.com/F9q3v3MUiu

The “star-crossed” artist took to the steps of the Met in an elegant Prada satin gown styled by Erica Cloud. The timeless piece was embellished with colorful jewels, but the detailing of the encrusted bow, black silk gloves, and feather fan topped off the look. Musgraves world-renowned makeup artist, kept her glam natural with a rosy lip and soft eyeshadow to make the ensemble stand out at the prestigious affair.

“To me, The Gilded Age/Gilded Glamour was all about opulence, and I find that the richer the skin, the more luxurious the beauty look,” makeup artist Moani Lee shared in a statement. “I’m a big fan of gorgeous skin all around, so I was thrilled to have the chance to really play that up.”

The hitmaker strolled into the soiree interlocked with poet boyfriend Cole Schafer and the cast of Baz Luhrmann’s upcoming biopic, “Elvis.” Musgraves recorded a fresh rendition of Elvis Presley’s 1961 classic, “Can’t Help Falling in Love,” for the highly anticipated film that is set to drop on June 24. The 33-year-old gave the star-studded guest list a preview of the old-school track in a chic Rodarte one-shoulder gown during the ceremony.

As Musgraves’ infectious vocals caused a shiver down the attendee’s spine, Stefani showed up in a breathtaking neon yellow two-piece. The Grammy Award-winning artist joined forces again with Vera Wang to curate the customized look. The floor-length skirt was inspired by the wedding dress she wore to marry country star Blake Shelton.

“Vera called me to see if I wanted to come and be her date, and of course, I wanted to. The thing is she did my wedding dress, I got married this year so I just felt like it was appropriate that I come to the ball and celebrate that,” the singer told Vogue on the Met live stream. “…And all of the sudden we’re in neon!”

The “Nobody But You” artist continued to mention that they went with a bright design, in hopes of spreading happiness.

“It feels happy, and I think everybody wants to feel a little bit happy,” she added before getting into the nitty-gritty of the getting-ready process. “I feel like I already did the fun part, which is getting all ready. That’s always my favorite thing. It’s like ’What’s the dress gonna be like?’ And the fantasy of that and talking with the designer and figuring out what the nails, the hair and makeup,” she said while pointing out she did her own makeup.

Although the eye-catching design was inspired by her intimate wedding with Shelton, he was not in attendance. In fact, Stefani told ET in 2019 that the country crooner would never appear at the Met Gala.

“That will never happen…ever!” she told the publication in confidence.

Musgraves and Stefani have become a mainstay on Wintour’s guest list, as the country-pop phenomenon made her debut in 2019 and Shelton’s other half celebrated the “Punk: Chaos To Couture” exhibition in 2013.