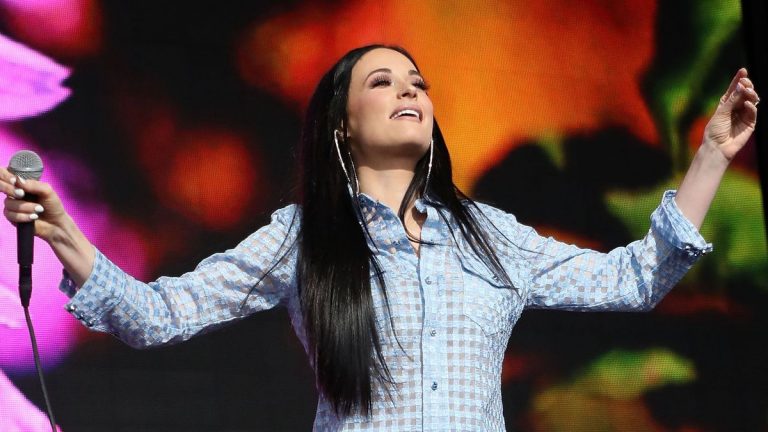 Ever since Kacey Musgraves exploded onto the scene back in 2013, she has proved time and time again that she is a passionate LGBTQ+ ally – looking to demand change within the country music space.

The “Follow Your Arrow” singer recently (February 3) sat down with Amazon Music’s Country Heat Weekly co-hosts Kelly Sutton and Amber Anderson to spark a conversation around inclusivity in the genre. She also shared how she created a safe space for fans on her current Star-Crossed: Unveiled Tour.

“I just feel like one thing that I’ve been really happy about is that people feel like they’re invited to a party that they may not have felt invited to before,” confessed the six-time Grammy award winner.

While Musgraves revealed that it is refreshing to see the genre “widening in a lot of different ways,” she did not hesitate to stress that society and the country community still have a “long way to go.”

“For me, it’s not just about inclusivity in the LGBTQ community, but I’m so glad that there are more country artists of color or songwriters of color,” she told Amazon Music. The powerhouse vocalist believes that the long-overdue shift in the right direction will elevate the genre, as it will bring new stories and fresh sounds.

“I feel like there’s hopefully a widening of even song matter,” says the multi-platinum artist full of excitement. “What we’re singing about, what the songs sound like, just diversity across the board,” she added before voicing that there will always be naysayers not willing to grow.

“You do have to take baby steps, and I think there’s always gonna be people that are close-minded in any institution or genre. But, I think it’s really cool to be alive in a time where things are being pushed forward…even if it’s in a small way.”

To help push her initiative, the country-pop trailblazer called in King Princess and electro trio MUNA to help start the party. The two queer acts known for having a loyal LGBTQ+ following recently kicked off their run with Musgraves on January 19 in Saint Paul, MN.

When the news broke that the two were heading out on the road with Musgraves, fans took to social media to share their excitement. “I want to be a groupie on this tour,” commented Leslie Jordan on the singer’s initial tour announcement. “Kacey touring with King Princess and Muna this winter,” a Twitter user shared with a pride Gif.

Kacey touring with King Princess and Muna this winter pic.twitter.com/jh3U69FjsR

The brunette beauty known for her angelic vocals and relatable lyrics also told Sutton and Anderson that fans should not expect fabulous costume changes, as she has run into several wardrobe malfunctions in the past.

“Honestly, I get really stressed out by costume changes. I have had one that has gone really wrong before,” told the songstress. “We couldn’t get the damn zipper down…it was like a bad dream. The band kept playing, and they were waiting for me to get on stage. I could hear them in my ear, but I couldn’t get there in time, and I was sweating buckets,” she laughed while telling the behind-the-scenes story and confirming that she would never switch outfits mid-show again.

Although Musgraves fanatics won’t see multiple fire fashion moments on The Star-Crossed: Unveiled Tour, they could expect to feel like they are in an intimate setting with the star. “My goal was to try to bring that intimate theater vibe to arenas,” expressed the musician. “When you walk in, you see these giant velvet crimson red theater curtains. I just thought it would bring everybody in and make them feel like we’re back in these intimate theaters.”

Although she stands in front of a simple, yet elegant backdrop – she hopes her informal conversations with the audience and her songs bring the pizzazz ticket-holders crave. Musgraves will be on the road until February 20 and will wrap at the Los Angeles STAPLES Center. Tickets are currently available for purchase here.