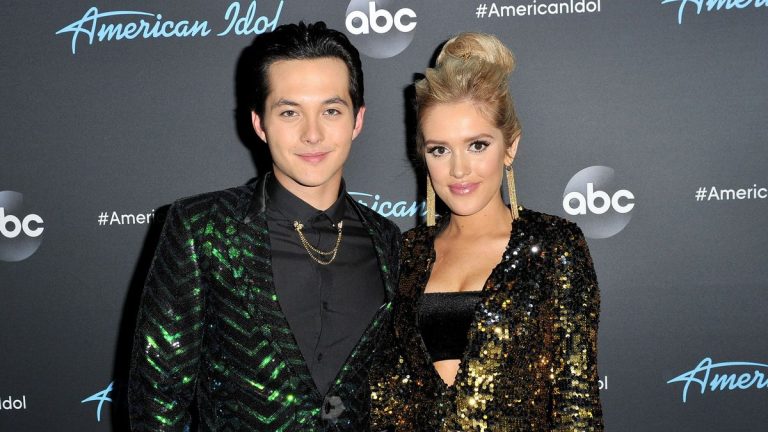 The singer and former contestant Laci Kaye Booth joined forces and kicked off the night with a cover of “Stop Draggin’ My Heart Around” by Fleetwood Mac’s Stevie Nicks, Tom Petty, and the Heartbreakers. The franchise made it clear that the performance was filmed before Hardy turned himself in.

A disclaimer that read, “Previously Recorded” appeared across the screen during the act. Booth tackled Nick’s introduction, as Hardy joined in on the chorus belting and plucking at his electric guitar.

Ahead of the performance, the two musicians mentioned that they run into each other often in Nashville.

“Our paths get to cross quite a bit in Nashville, which is fun,” Booth told the cameras. “I’m feeling so much emotion, I just feel so blessed that I got to be part of this journey. I’m absolutely living out the dream that I’ve always envisioned for myself…writing, touring, and releasing music,” she added.

So we are just fine with letting this Laine Hardy footage air and not editing this out? A little weird. #AmericanIdol

“I am very disappointed at the way American Idol is treating Laine Hardy. You are just hearing one side of this. American Idol is looking a lot of fans over this,” a Twitter user stressed. “So we are just fine with letting this Laine Hardy footage air and not editing this out? A little weird,” said another.

On Thursday, April 28, Hardy received a warrant from the Louisiana State University Police Department for allegedly planting a recording device in his ex-girlfriend’s dormitory.

“Earlier today, I received a warrant due to allegations made against me and have been fully cooperative with the Louisiana State University Police Department,” he wrote on social media Thursday. “I understand that my career has thrust me into the public spotlight, and I embrace that wholeheartedly as my entire world belongs to my music and my fans. However, due to the sensitive nature of this allegation, I humbly ask for privacy at this time. I have the utmost respect for the law and will assist in their investigation as needed moving forward,” he concluded.

The 21-year-old college student turned himself in to authorities Friday (April 29) morning. LSU spokesman Ernie Ballard issued a statement to The Post confirming the arrest.

According to WAFB9, the vocalist did not have to post bail and was released Friday evening at 5:30 p.m. The specific crime holds a maximum penalty of $10,000 fine and up to ten years in prison.

In early April, the female student found the device in LSU’s Azalea Hall and told the police immediately. The victim is not named in the official booking documents obtained by the New York Post. However, the report confirmed that the two had a romantic relationship from November 2021 – February 2022.

Hardy confessed to his ex-girlfriend via Snapchat that he placed a “bug” in her room, but “destroyed it.” The victim shared the social media conversation with the police.

The same day the artist was booked into East Baton Rouge Parish Prison, he was slated to perform at the Mississippi Mudbug Festival. Singer Hannah Everhart stepped in due to the sudden cancellation.

Ahead of the scandal, the singer shared with ET his excitement about the “The Great Idol Reunion.”

“This is a huge milestone for ’American Idol,’ and being a part of their 20th year anniversary is going to go down in history as part of this show. So, it’s pretty cool to be a part of it,” he gushed to ET reporter Matt Cohen.

“American Idol’s” birthday bash aired on Monday, May 2 at 8/7c on ABC.

Share. Facebook Twitter Pinterest LinkedIn Tumblr Email
Previous ArticleTim McGraw Says His Mom Encouraged Him To Move To Nashville After Dropping Out Of College
Next Article New age classical music /no ad/ For you concentrate For sleep For study