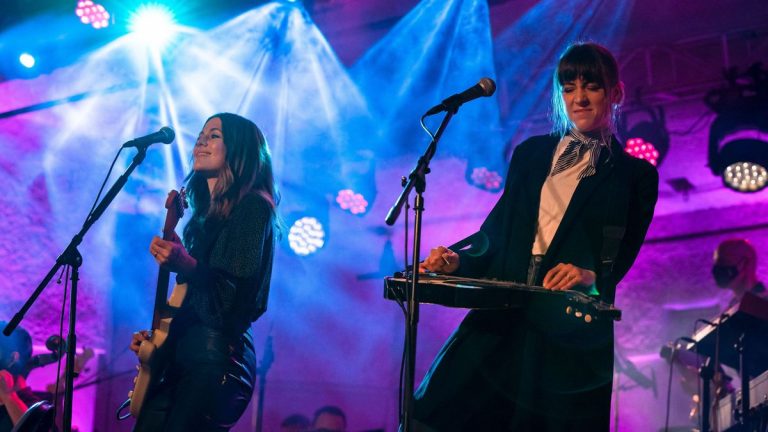 As did all musicians faced with COVID-19’s onset, countrified roots rockers Larkin Poe’s collaboration with Miami-based experimental orchestral group the Nu Deco Ensemble was borne of a desire to create engaging content meant to satisfy a fanbase yearning for captivating material. Thus, this video version of legendary gospel-folk vocalist Bessie Jones’ stomp and clap song “Sometimes” from Larkin Poe’s 2019 Grammy-nominated album, Venom & Faith, was a part of the band’s special COVID safe livestream in December 2020 that is now being released as part of Paint the Roses: Live in Concert — a new album that reinterprets Larkin Poe’s music, including their 2020 release Self Made Man and more, through an orchestral lens.

In regards to the concert that spawned the album, Larkin Poe writes to CMT, “We shot the video live in Miami with Nu Deco Ensemble at an outdoor bandshell not far from the ocean. It was exhilarating and listening back to the board recordings later we could feel the magic; so we decided to release the whole evening as an album!”

Larkin Poe’s desire to work with the Nu Deco Ensemble hearkens back to their youth. “Before we could even speak in full sentences, our introduction to the language of music began with classical violin and piano lessons. It has always been a dream of ours to find a way to honor our classical upbringing.” Via the Miami-based unit — an act that can diversely count collaborating with Ben Folds, reimagining music by Daft Punk, and being co-founded by conductor Jacomo Bairos and composer/arranger/producer Sam Hyken, conductors with histories working with both the Boston Pops and Bad Bunny in their history — Larkin Poe achieved that goal. “It felt like we were floating on a wave of sound and I think you can see that delight shining on all our faces,” the band adds.

Paint the Roses — out on September 17 — is available for pre-order by clicking here.