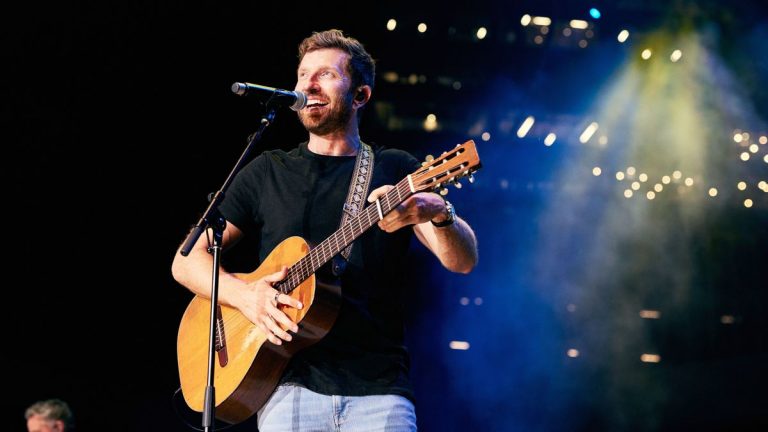 Country music star Brett Eldredge has been busy making magic in the studio, and he has not been quiet about the creative process. The multi-platinum artist recently took to social media to tease new single “Songs About You,” a heartbreak anthem that is expected to drop this Friday, April 22.

Within the short snippet, Eldredge poured a glass of bourbon to celebrate the finalized product and to showcase the up-tempo chorus.

“I’m about to put out what’s gonna be, I think will be your favorite song I have ever put out,” he said while grabbing the bottle of alcohol. “This song is called ‘Songs About You.’ I want to pour this and celebrate. Here we go. I’m playing it right here,” he added before revealing the single.

The hitmaker continued to sing along to the catchy lyrics that describe his roller coaster-like emotions after a breakup. Through impressive guitar licks and a steady drum beat, Eldredge displays his infectious vocals while singing about a man who is tirelessly trying to “get through” a split one step at a time.

@bretteldredge My new single #songsaboutyou is out Friday! #newmusic ♬ Songs About You – Brett Eldredge

The preview did not come as a surprise, as the Illinois native recently released a social media video of him recording a song with the same beat and sound in the studio.

“Getting warmed up to drop a beastly new jam on ya sooooon!” he wrote in the caption to get listeners fired up.

In late February, Eldredge shared on Instagram that he was in Montana with frequent collaborators Mark Trussell and Heather Morgan, working on new material for his forthcoming record.

“Been making the best music I’ve ever made, Montana took it to another level…amazing trip with amazing people…can’t wait for you to hear the album I’m working on! It’s a beat,” the platinum-selling artist disclosed alongside a string of photos.

A release date for the record remains unconfirmed, but the new song will follow his successful single, “Want That Back.” The vulnerable lyrics paired with the soul-touching instrumentals came from a puzzling place when Eldredge’s anxiety got the best of him. In true sing-songwriter fashion, he picked up the guitar as a form of escapism.

“I woke up at 3:33 one night and was feeling the weight of everything going on in the world,” explained Eldredge in a statement. “From the pandemic, to the hate and the violence – all these different things made me crave the pure and simple parts of life that I miss. I was looking for comfort in these moments that I feel bring purpose into my life. It was just such a powerful feeling that overtook me, and I couldn’t go back to sleep until I wrote the whole chorus.

The thought-provoking melody penned alongside Scooter Carusoe is available to stream everywhere, and “Songs About You” will be out Friday, April 22.