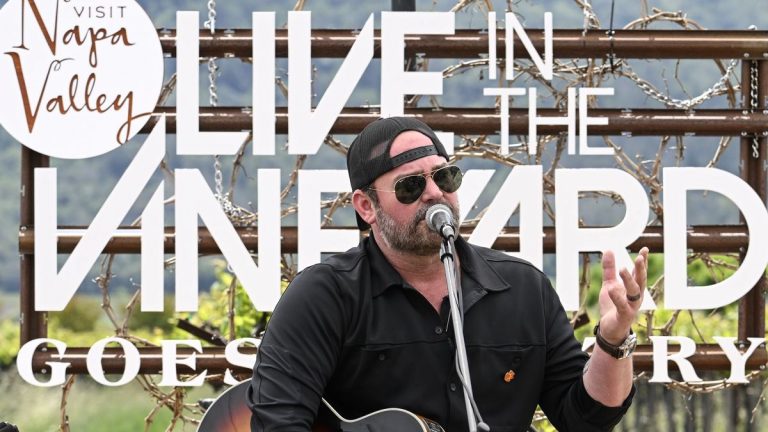 North of San Francisco resides diligent vintners who have dedicated their livelihood to pressing grapes and turning Napa Valley into the wine country it is today. Multi-platinum artist Lee Brice raised a warm glass of Cabernet Sauvignon to the hardworking farmers of America at the 2022 Live In The Vineyard in picturesque Napa Valley before he serenaded music executives with his chart-topping hit, “Drinking Class.”

Brice was not the only country star breaking the sacred silence among the rolling hills of Napa Valley. Hitmakers such as Chase Rice, Charles Esten, Joe Nichols, Jessie James Decker, Breland, Caroline Jones, and more flocked to Live In The Vineyard Goes Country to share their potential with individuals who have the power to bring their artistry to new heights.

After five successful years – Live In The Vineyard has become a bucket list event for many musicians. Artists within the star-studded lineup are granted the opportunity to rub elbows with music supervisors, radio programmers, DSP curators, label executives, VIPs, corporate hospitality groups, and more from around the country in an intimate setting.

In just three days, notable names in country get to enjoy farm-to-table meals prepared by Michelin Star chefs and expand their palate by taste-testing fine wines, all while listening to live music from fast-rising talent and Grammy Award-winning musicians.

“Napa Valley is beautiful. I have never been here,” shared Ray Fulcher, the songwriter behind the chart-topping record ‘What You See Is What You Get’ by Luke Combs. “When you are trying to get a record deal and try to come up, this is one of those events you always hear about. You are like, ‘man…that would be cool to be part of one day and get that opportunity.’ You have these moments in your career where you go, ‘alright, the hard work paid off, and you were right to keep believing.’ Being here this week and being a part of it is special,” he added.

As Live In The Vineyard has become a fast track for musicians, it also benefits local wineries trying to get back up on their feet after the pandemic. Attendees were invited to Charles Krug, a scenic estate filled with spider leg-like vines. As the sun started to set and the sky began to look like cotton candy, Jessie James Decker, Mitchell Tenpenny, and Joe Nichols started the party at the charming welcome reception. To winemaker Giovanna Mondavi, this event was exactly what she envisioned.

“We’re at Charles Krug Winery, which is the oldest family-owned and operated in Napa Valley. For the first time in Mondavi history, we are 75 percent female-owned,” Mondavi told CMT. “The opportunity to continue a legacy is different than building a business because it’s our responsibility to keep what’s been brought to us. We have concerts coming into town, trying to get some diversity in the valley – bring the world to Napa Valley in some capacity. The number one thing about wine is it brings together great people and great entertainment. Not only do the musicians and the artists get to come and do what they do best, but they get to do it in an intimate setting that’s just more comfortable. It gives you goosebumps because not everyone can produce that type of environment,” she added.

As Mitchell Tenpenny shared his fan-favorite hit “Truth About You” and Decker delivered “Should Have Known Better,” the audience snacked on delectable bites. However, it wasn’t until country crooner Joe Nichols sang “Tequila Makes Her Clothes Fall Off” that music giants jumped out of their seats and allowed the wine to take control of their dancing feet.

Following the evening, a selective group made their way to Louis M. Martini Winery, where Caitlyn Smith, Restless Road, Erin Kinsey, and Jordan Fletcher performed table-side. One by one, each musician revealed the inspiration behind singles that reached success on country radio. Programmers embraced their raw vocals as they swirled, sniffed, and sipped on two warm red wines.

“There are a lot of radio stations here, and obviously that’s our big goal is to get a No.1 with “Growing Old With You” and see that song climb,” gushed Colton Pack from Restless Road about their first mainstream hit. “We’re really inspired, I think we’re going to start Restless Rosé down the road,” he said while laughing.

After a much-needed night of rest and hydration, Live In The Vineyard woke everyone up with a glass of bubbly and a morning Jam session from Ray Fulcher, Tim Duggar, Easton Corbin, and Ryan Griffin at Prisoner Wine Company. With champagne flowing, music-goers were ready to tackle the day and singalong to Hannah Ellis, Jameson Rodgers, and Lee Brice at Peju Winery.

While many continued to vineyard hop, some took time to themselves to prepare for the grand performance at a retro theater in the heart of Napa Valley. Country music singer and Hollywood actor Charles Esten kicked off the concert with “A Life That’s Good” from the hit television show “Nashville.” Caroline Jones, Tyler Braden, Kassi Ashton, BRELAND, Morgan Evans, and Chase Rice followed with fan favorites and even unreleased tracks. For the first time in history, Walker Hayes beamed in through Proto, a hologram device to deliver the viral single, “Fancy Like.”

“Following the last two years, when technology has played such an essential role in keeping artists and fans connected, I had a vision and commitment to finding a way we could bring both in-person performances and technology together,” Bobbii Jacobs, Live In The Vineyard Goes Country Founder told Forbes. “We thought [Walker] would be perfect for performing for us on the Main Stage. Having this technology allowed us to do that.”

Concert goers looking to continue the festivities were welcomed at the Westin Verasa Napa for a late-night party. The luxury getaway wrapped early Thursday morning (April 28) with an elegant brunch at Domaine Chandon, which featured performances by Ashland Craft, Griffen Palmer, Hailey Whitters, and Ashley Cooke.

The unique blend of musicians throughout the world-renowned affair was as exquisite as a bottle of fine wine.