Luke Combs: the Story Behind New Song “Doin’ This” 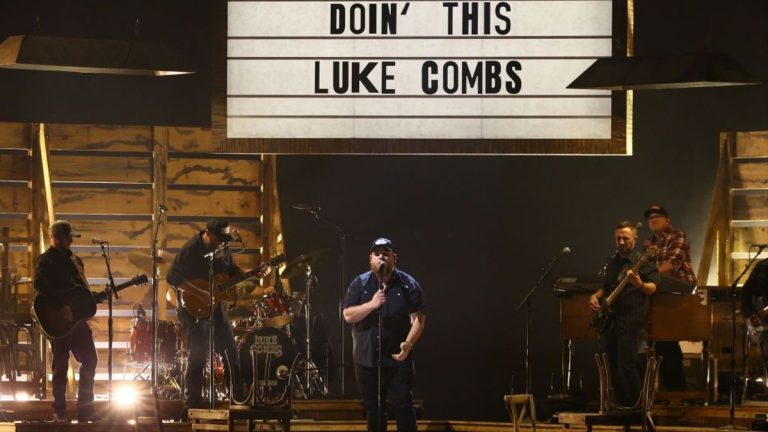 A decade ago, Luke Combs lived in a small apartment above a strip mall in Boone, North Carolina.

He jokes that 208 Faculty Street, Apartment 3, is where “the dreams came true.”

Combs was in college and spent his nights working as a bouncer in the bar below his apartment. He wanted a promotion from working the door to playing the stage. Combs auditioned with a mop in his hand for the bar owner after last call.

He got the gig.

So, when Combs sings “I’d still be doin’ this if I wasn’t doin’ this” in his new song – he knows it’s true because he already did it.
Combs unveiled his ode to performing minutes before winning Entertainer of the Year at the 55th CMA Awards Wednesday.

Lyrics include: Someone asked me once in an interview|What was growing up like?|Where’d you go to school?|And what would you do if you weren’t doin’ this?|I’d be drivin’ my first car, an old worn-out Dodge| Tryin’ to make rent with a dead-end job, just makin’ due|With tips in a jar, my guitar, and an old barstool.

Combs wrote the song with frequent collaborators Drew Parker and Robert Williford – the same pair with whom he penned “Forever Afterall” — on a day when they were grappling for ideas.

“We were sitting in the man cave at my house, and we couldn’t come up with anything to write about,” Combs recalled. “We were on the back porch talking, and I get asked in interviews a lot, ‘What would you be doing if you weren’t doing this.”

Combs said he always jokes that he would be homeless. In reality, he said, “there was never a plan b.”

“Once I decided that this is what I was going to do, it was at this level or at the level that I was at when I started,” he explained. “I would be chasing this (entertainer of the year trophy) if I wasn’t holding it in my hand right now. I’ll always be doing that.”

Music makes his blood pump, he said. Everyone else who plays music, Combs believes it makes their blood pump, too.

“It gets them out of bed in the morning,” he said. “To be able to write a song about that that you feel genuinely connects with some of your peers is really cool.”