Maddie & Tae Highlight The Female Songwriters Behind “Through The Madness Vol. 1” And Stress The Struggles Women Face In Country Music 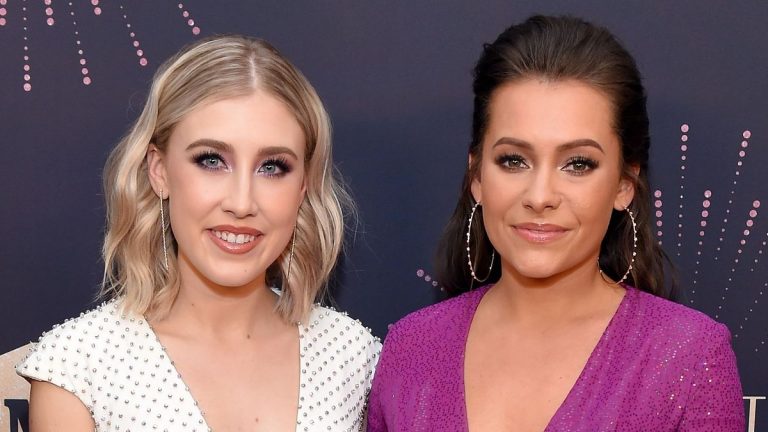 From the outside looking in – country music appears to be shifting in the right direction, many would even say the genre is experiencing a “new era.”

Although females within the industry are climbing the charts, scoring prestigious accolades, and receiving air time on country radio, notable names behind-the-scenes are using their voices to stress that there is still work that needs to be done until they feel secure and accepted.

CMT sparked the complex, yet necessary conversation over Twitter (March 10) and invited the gifted songwriters behind Maddie & Tae’s recent record, “Through The Madness Vol.1” to dish on the harsh reality of being a woman in country music and to reveal the creative process behind the raw record.

In late January, Maddie & Tae released their highly anticipated EP, “Through The Madness Vol.1,” which features “Don’t Make Her Look Dumb,” with Morgane Stapleton, “Strangers,” “The Other Side,” “Woman You Got” and more thought-provoking tracks.

“This project is the product of finding and focusing on the beauty, love, growth, strength, and wisdom you gain through the madness if you look for it,” said Maddie & Tae upon release. “Through the chaos of these past couple of years, especially these past couple of months for us, we learn time and time again that love is enough to carry us through. May this be a giant hug and hand for you to hold through the madness.”

The 8-track project was not an easy task to accomplish, as the two resilient creatives had to challenge themselves to dig deep and wear their hearts on their sleeve. While Maddie declared herself as an “open book,” she shared that it took 12 years to peel back the layers with Tae.

“We had to pry her greatness out of her because she was just nervous of being vulnerable and sharing such private things or private situations,” Maddie said before long-time collaborator Lori McKenna chimed in to shine a light on creating a “safe space” within the writing room.

The gifted singer-songwriter continued to articulate that the key to penning a great song is to seek out open-minded individuals who can cultivate a comfortable atmosphere.

“I always tell new writers – don’t let yourself be in a room where you don’t feel like you can’t tell your truth,” she said while also mentioning that the women who worked tirelessly on the “Through The Madness Vol.1” made it a priority to strive for a healthy and positive creative process.

“I’m just going to brag on us for a minute, as we all made each other feel safe. That is part of our job as songwriters. I have made connections with writers like you guys in a way that I would have never had without music. It is because we have to. We have to trust each other, and we have to know that we can spill out our guts, and the other person is going to pick them up,” McKenna added with enthusiasm.

While bouncing off ideas with an empowering support system, Maddie & Tae were able to get to a vulnerable place, where they had the confidence to open up about sensitive topics like depression and conquering change. For instance, while penning “Other Side” via Zoom, Lori McKenna and Josh Kerr brought up a specific moment in their YouTube documentary titled “Reframed.” Within the multi-part online series, Maddie vocalized her struggle with mental health and internal fight with depression. However, Josh knew she would “always make it to the ‘Other Side.’”

On the subject of vulnerability, Laura Veltz stressed her viewpoint and the issue several musicians are facing today.

“I feel like country music right now is going through a little bit of an identity crisis. To me, it feels a little bit like there’s a whole category of country that isn’t interested in the stuff we’re talking about – diversity, vulnerability, honestly, truth, and moving forward,” she shared. “In a general sense, it seems as though we’re splitting into two…but the good news is that there is a group that is starting to magnetize towards itself that feels very much like the things we’re talking about,” she added.

Women within the genre have become the driving force behind that “group” and “change” that she speaks of. Maddie & Tae have built a flourishing music career by staying authentic and by taking chances – despite negative repercussions.

“We sometimes struggle with country radio because what we write is not the thing that everybody likes,” Maddie said. “It’s more the vulnerable stuff … but I wouldn’t trade it for the world because we are not backing down from sharing our TRUTH. We are not watering down our music for something that we’re not even chasing. If you aren’t digging down in there, I feel like you’re kind of robbing yourself as a songwriter. You are robbing yourself of that beautiful, vulnerable moment.”

She continued to reveal that rejection from the business side of things often makes her and Tae feel like outcasts. She noted that they are not alone, as several other females within the industry feel the same way.

McKenna reinforced Maddie’s remark, as she credits female legends for laying down the foundation for female musicians today.

“Throughout history, we have always been the ones to say the things that need to be heard,” she disclosed. “That’s what you guys [Maddie & Tae] are doing.”

Before Palmer wrapped up the session, Maddie gave listeners and fellow creatives a piece of advice to take with them.

“They will break you down and break your heart,” she said about the cut-throat male-dominated industry. “It’s done that to me a bajillion times. It’s a struggle every single time we go on stage or go into an interview. All of us feel like an outcast. So, just find your tribe and silence the noise.”

“Through The Madness Vol. 1,” created by their tight-knit unit, is available to stream everywhere now. Maddie confirmed that fans could expect Vol. 2 summer of 2022.