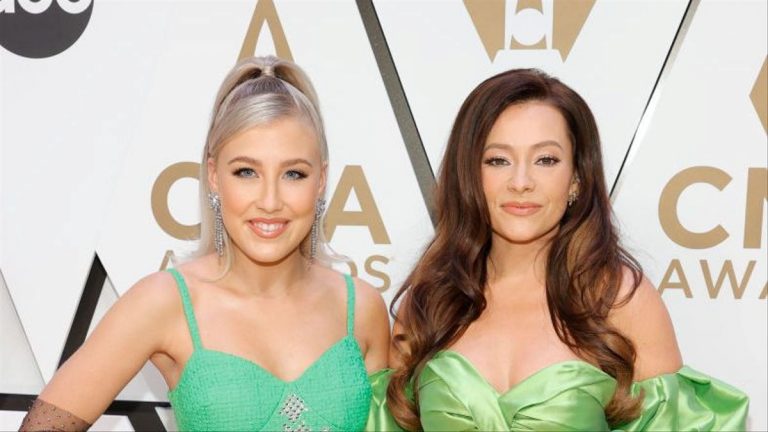 Maddie & Tae had their winter tour and their album release all planned. By this point in the month, the women thought they would be two-thirds of the way through their 2022 CMT Next Women of Country Tour Presents: All Song No Static Tour dates and that Taylor Kerr still had about eight weeks left in her pregnancy. But that’s not what happened.

In December, Kerr experienced pregnancy complications that confined her to the hospital, and they had to reschedule their tour. Kerr’s daughter, Leighton, was born approximately three months early in January. And while Kerr is at the hospital caring for her premature – but strong – baby girl, Maddie Font is spreading the word about their new album “Through The Madness Vol. 1” that is out now.

They named the album “Through the Madness” to reflect the uncertainty they experienced during the pandemic.

“(We were) not touring, trying to run a business that has no income as everyone in our position was trying to do,” she said. “And it was … ’Our industry took a really hard hit and is still taking a hard hit. And there’s so many businesses and everything that’s just really had a hard time during this pandemic.’”

When the women figured out COVID-19 wasn’t going away around May of 2020, they started writing songs.

“(Writing) is the only thing that’s been our only constant,” Font told Today’s Country Radio with Kelleigh Bannen. “We’ve had so many different experiences, but I think that this album is all about seeing the beauty in the madness and kind of walking into the madness of your life with like, ’All right, I’m ready for whatever crazy life is about to throw at me.’”

She had no idea the life-changing circumstances she and Kerr were about to endure with the premature birth of Kerr’s daughter.

“It’s terrifying,” Font said. “And I don’t know what’s scarier, [Leighton] being in the NICU or just the journey to get there. It was really scary. It was really, really hard times. I keep joking that I jinxed us with the album title because I’m like, ’Oh my God, I named the album “Through the Madness.”’ And then literally a week before the album, baby Leighton comes, and it’s just crazy.”

Font says Kerr is “getting settled, and Leighton’s doing great.”

She also admitted the duo was initially concerned when Kerr got pregnant because they knew they had to tell their manager and start changing plans. They just didn’t know how soon or drastically their worlds would shift.

“It’s funny, we planned this whole thing and had this whole plan, and then God’s like, ’Nah, that’s not what’s going to happen. Actually … it’s going to be even better than you could imagine.’ But yeah, I think there’s this pressure on female artists in country music … that you can’t do it all. And I don’t know why as a society we think of women as that one-dimensional.”

While Font is eager to be a loving aunt to baby Leighton, she isn’t ready to start her own family.

“It’s like you’re trying to run a business; you’re trying to make fans,” Font said. “You’re trying to release music and throw a baby in the mix. And it’s a little complicated… And you need [your body] for both jobs. You need your body for your baby and your body for your job. It’s crazy. And I feel like it’s hard as women to… I feel like you’re going to feel guilty either way. If you’re not with your baby and you’re working, you’ll feel guilty, or if you’re with your baby, you’re not working. It’s just like I wish that that guilt would just go away. But I think it’s ingrained for some reason in us.”