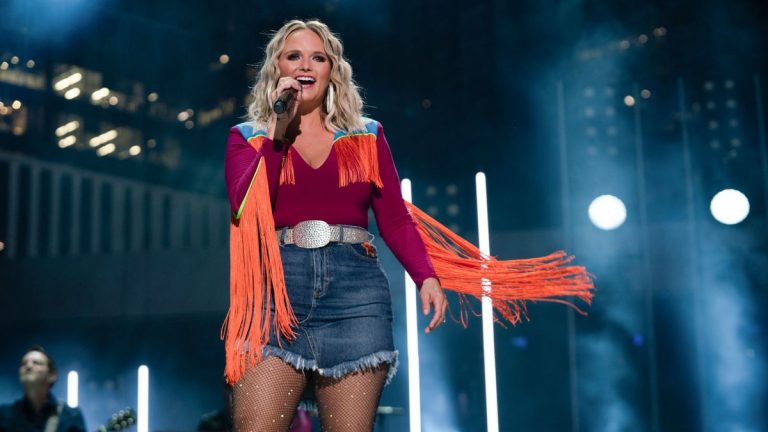 Country music powerhouse Miranda Lambert appeared at the C2C Festival in London on Friday, March 11, and performed an unreleased track titled “Actin’ Up” from her forthcoming record, “Palomino.”

After accepting Entertainer of the Year at the 2022 ACM Awards virtually from Europe, Lambert kickstarted the country festival alongside notable names like Kip Moore, Russell Dickerson, Priscilla Block, Tiera Kennedy, and Morgan Wade.

Dressed to the nines in a rainbow fringe top, rhinestone cowgirl boots, and a wild west belt buckle – the vocalist took center stage and tested out a string of new material on the rowdy crowd.

“It’s called ’Actin’ Up,” Lambert said before she broke out into the singalong worthy hit.

The gritty mid-tempo anthem produced by Lambert, Luke Dick, and longtime collaborator Jon Randall, is the opening track on her upcoming 12-song project. With electrifying guitar riffs and heavy percussion backing her vocals, Lambert tells a story about a woman “Actin’ Up” and craving adventure.

“I want a sunset ride | A velvet rodeo| A Colorado high | A California glow | I want to see the desert| From a painted palomino | Señorita need to have a little fun | I’m actin’ up | I’m actin’ up,” she delivered in the country-rock chorus.

During her evening set, the hitmaker also performed fan-favorites such as “Bluebird,” “Settling Down,” and “The House That Built Me.” The multi-platinum artist even incorporated the new song “If I Was A Cowboy” to get fans excited for her eighth studio album that will be available on Friday, April 29.

“The making of this record has been one of the most fun and creative experiences of my career,” Lambert said in a previous statement. “Luke Dick, Natalie Hemby, and I went out to my farm in Tennessee in 2020 and started writing songs. We figured while we have time, let’s get out to the country and see what happens. The first one we wrote was ’Tourist,’ and that set us on a path to create something with a bit of a theme. Since we couldn’t travel at the time, we decided to go on a journey through songs. I hope y’all are ready to travel with us wandering spirits and meet some cool characters with great stories.”

While at the C2C festival, she dropped another teaser called “Strange.” The feel-good anthem encourages fans to “take a breath” when “things are out of sorts.”

The highly anticipated record comes on the heels of her holiday collection with the Pistol Annie’s and her award-winning project, “The Marfa Tapes.” “Palomino” will be her first solo album since her critically acclaimed album, “Wildcard.”

Lambert was not the only country music phenomenon who graced the C2C stage over the weekend – Darius Rucker, Luke Combs, Brett Young, Ashley McBryde, Scotty McCreery, and more brought their honky tonk twang across the pond.